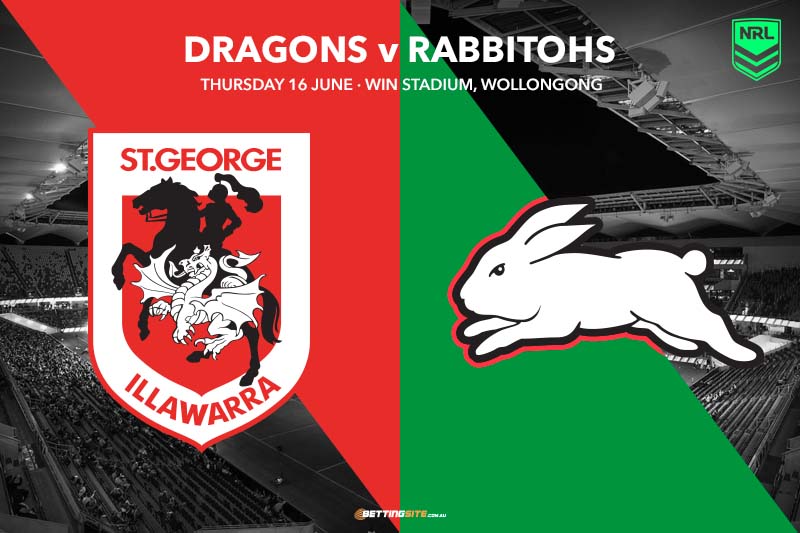 Round fifteen of the 2022 NRL season kicks off in Wollongong with the South Sydney Rabbitohs travelling south to take on the St George Dragons.

Both clubs will be looking to build on recent performances, as the Rabbitohs beat the Titans on the Gold Coast, while the Dragons had travelled north and took it to competition heavyweights the Cowboys at stages in Townsville.

The South Sydney Rabbitohs have had the pleasure of naming an unchanged 17 to take on the Dragons, while the Dragons welcome back Mikaele Ravalawa to the starting line-up and Tariq Sims back from NSW State of Origin duties.

The Rabbitohs have only managed to win two of seven games in Wollongong, and while history may not be in Souths favour, they are the better side leading up to this match. Souths are a side improving week on week through the middle stages of this season and will continue to do so Thursday in a dominant 13+ win paying $2.60.

This season, the St George Dragons have shown tendencies to concede tries in the right corner more than anywhere on the field, while also conceding tries in the middle of the field. Damien Cook’s form is beginning to it’s best. In the last four games alone Cook has broken 23 tackles without scoring a try. Given the Dragons allowed a weak try through the middle last week against the Cowboys, look for the Rabbitohs to look for similar opportunities with Cook who is a great value play to score at any time paying $5.25.

Alex Johnson has been in the rarest of form in recent weeks becoming the most prolific try scorer in South Sydney’s history. While the Dragons will surely plan to limit his impact, as well as the impact of the Souths attacking right edge in general, they will likely be unsuccessful in stopping Johnson from scoring. Johnson will surely get at least two tries on Thursday, as he tries to get his third hattrick in as many weeks. However, backing Johnson to score 2+ tries is the much safer option, and still is incredible value at $4.20 with the top betting sites.

South Sydney have not been the greatest defensive team as a whole this season but have shown since the bye in round thirteen that their attitude has improved. Given the Dragons average scoring 17 points per game (PPG) on average and the Rabbitohs concede on average 20 PPG, there is one market worth taking advantage of. In total points markets, you can get odds of $2.40 for the Dragons to score 11-20 points, which is a logical bet here.

These two NSW team mates will have a very interesting battle on Thursday night as they line up in the same position with vasty different skills sets. On paper, the plan for the Dragons looks to be aggression and power through the centre third of the field, two great assets of Sims. On the other side of the field, Murray’s leg speed and play the ball speed far exceeds most in the NRL, while he also has the ability to ball play for his playmakers. Can Sims overpower Murray, or will Murray outsmart Sims?? We’ll find out on Thursday.