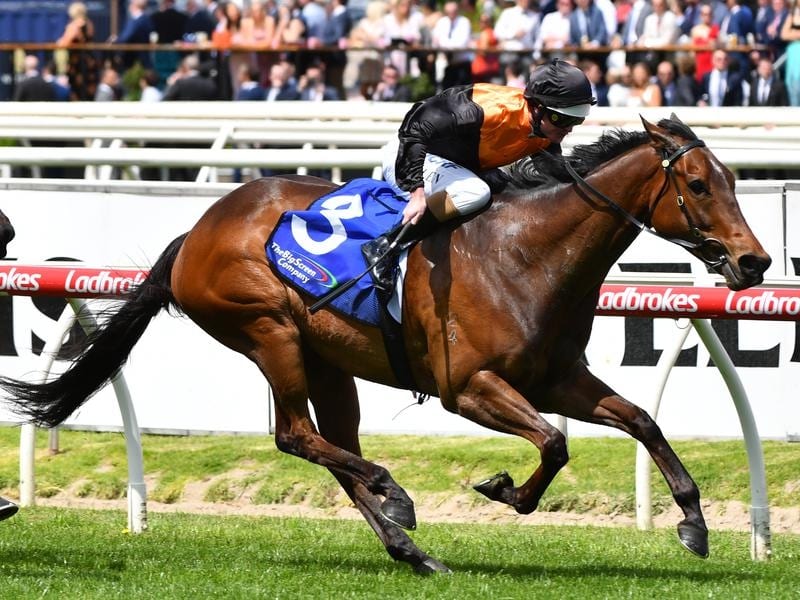 Rox The Castle has given trainer Kerry Edwards a tonic with his win on Caulfield Guineas day.

After spending most of the week in hospital, trainer Kerry Edwards has watched her best horse Rox The Castle race to a satisfying win in the Listed Weekend Hussler Stakes at Caulfield.

Edwards, who only trains a small team of horses, revealed she had been in hospital from Monday until Friday after puncturing a lung in a “stack” from a horse in an incident at the beach.

“This week has not been a normal week and to see him come out and do that, I’m just absolutely amazed with this horse,” Edwards said after Rox The Castle’s victory in Saturday’s 1400m Listed race.

“One of the younger horses had a stack on Monday morning and she injured herself and I ended up in hospital. I got out yesterday.

“I punctured my lung. It was a decent fall.

“The body has got some drugs in, so I’m feeling good. It could have been worse.”

Rox The Castle, ridden by Luke Nolen, took his record to eight wins from 14 starts with his half-length victory over Manolo Blahniq, with Renewal the same margin away third.

Edwards and connections are looking to raise the bar again with the Group Two Crystal Mile (1600m) at The Valley on Cox Plate day in two weeks on the radar.

“There’s not much to him but he has some in-built will to win,” Edwards said.

“They were coming at him but as Luke said, he’s just tough and he just doesn’t want to let them get past him.”