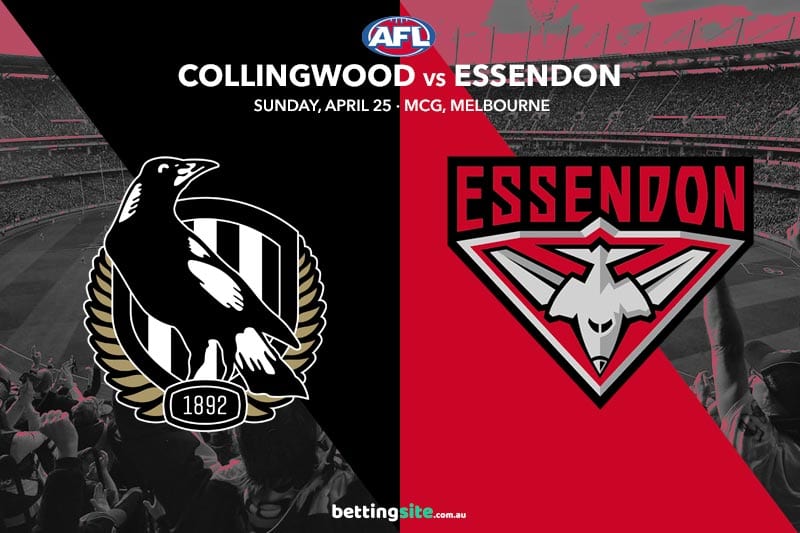 The traditional ANZAC Day blockbuster between Collingwood and Essendon takes centre stage in the AFL on Sunday afternoon at the MCG. Both teams come into the game at 1-4, and the pressure will only increase for the team that fails to walk away with the four points. Collingwood are $1.73 favourites despite losing their last three games, whilst Essendon are $2.15 outsiders with online bookmakers after a 10-goal defeat to Brisbane in the wet last weekend.

Collingwood will head into the clash lacking two of their best players with both Jordan De Goey (concussion) and Jeremy Howe (hamstring) both forced out due to injury. Joining them on the sidelines are Levi Greenwood (concussion) and Mark Keane (suspension), meaning the Pies will be forced to make four changes to their lineup.

Essendon will also be without a crucial cog in their defence with Jordan Ridley (concussion) ruled out of the ANZAC Day clash. We expect it to be a straight swap with Brandon Zerk-Thatcher, who will line up on either Brody Mihocek or the recalled Mason Cox.

Collingwood are in a messy situation, both on and off the field. One thing that has been prevalent for the best part of 15 years is the superstar qualities of Scott Pendlebury. Pendles has had a quiet fortnight by his lofty standards, recording 20 and 24 touches respectively in his games against the Giants and Eagles. The Collingwood skipper thrives on the big stage and has won the ANZAC Day Medal on three occasions, so we are happy to take on the $3.30 on offer for Pendlebury to pick up 30+ touches.

When these two teams last met, Jake Stringer was instrumental in getting the Bombers over the line in an empty MCG. The former Bulldog will have close to a full house to perform to this Sunday, and we’re expecting him to put on a bit of a show. He had a quiet game against Brisbane last week in diabolical conditions, but seven goals in his first two games of the year shows he means business in 2021. The $2.50 on offer for Stringer to kick three or more goals is well worth a look.

Brodie Grundy on his day is one of the top 10 players in the competition, but he needs a strong performance from his midfielders to maximise his influence. Grundy is set to come up against part-time ruck Peter Wright this Sunday, and it will be interesting to see if Collingwood can make the most of that obvious advantage at the stoppages.

Grundy had 28 touches and 54 hitouts against Brisbane’s makeshift rucks in Round 3, yet the Pies were battered in the middle and ended up losing that game. If Grundy can have a similar output on Sunday, the mids will need to make most of his dominance and put pain to Essendon on the scoreboard. However, if the Bombers can get their setup right and match Collingwood on the ground, then it will go a long way in the Dons claiming victory.

Collingwood to win by 1-24 points

The Pies need a win if they are to have any hope of playing finals footy in 2021. Having won five of the last six ANZAC Day matches, the form suggests they will be hard to get past if they bring something like their best footy. On the back of a horror fortnight, we expect the Pies led by Scott Pendlebury, Brodie Grundy and co. to have too many answers for the undermanned Bombers.

Youngster Beau McCreery has added a bit of grunt to the Collingwood forward line. On the back of a two-goal game against the impressive West Coast last weekend, we expect him to build on that form with another couple against Essendon. He looks to be a tricky matchup for the Bombers, and if he performs to the level he showed last Friday night, then the $2.70 on offer looks to be good value.

We expect Scott Pendlebury to lead the Pies to a tough win against their arch-rivals. Jake Stringer will make sure Essendon don’t go down without a fight on Sunday afternoon, and we also like Beau McCreery to kick multiples in his first taste of ANZAC Day footy.