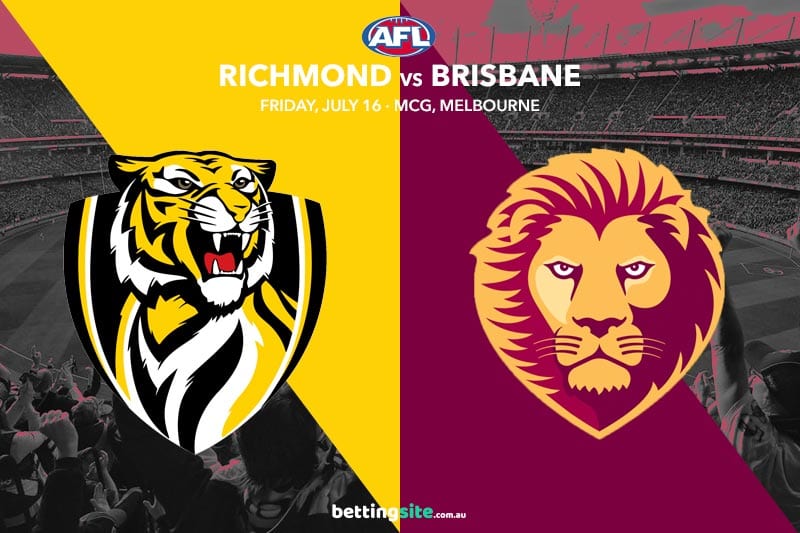 Can the Richmond Tigers snap their losing streak this Friday night at the MCG, or will the Brisbane Lions be too strong when the big cats square off in round 18 of the 2021 AFL season?

It is now or never for Damian Hardwick’s Tigers if they want to stay in the finals race, as they have dropped to 12th on the AFL ladder after four consecutive losses.

The Lions were in terrific form before they lost to St Kilda in round 17, and it only got worse post-game when Eric Hipwood (ACL) and Marcus Adams (foot) were confirmed casualties.

Chris Fagan is confident his Lions have enough depth cover the pair of injuries, with ex-NBL player Tom Fullarton the likely replacement for Hipwood up forward.

The Tigers will sweat on the fitness of Toby Nankervis (knee), Nick Vlastuin (knee) and Shane Edwards (ankle), who are all pushing to overcome their injuries in time for this Friday’s game.

These teams clashed back in round 10, which resulted in a 28-point victory to the Brisbane Lions at the Gabba. This time the Lions will travel to the MCG, where they have lost nine straight matches dating back to 2014. The home field advantage will be the Tigers’ main selling point this week, but their ongoing list of injuries has been devastating in the last four rounds.

Without Dion Prestia, Kane Lambert, Shane Edwards and a notable ruckman, the Tigers will struggle in the midfield. Shai Bolton has been a shining light this season for Richmond, averaging over 20 disposals per game. Bolton sharks opposition hit-outs very well and works hard to accumulate his touches, making him a good option to get 25 or more disposals in round 18.

Jack Riewoldt will line up for his 300th career game this Friday night, which comes one week after kicking his 700th career goal. The power forward needs to use all of his experience against the Lions this week if the Tigers are to have any chance of winning.

Joe Daniher has kicked a goal in every game this season, but he has not taken control in his first year at Brisbane. We think Daniher will step up for the Lions and kick more goals while Hipwood is sidelined, so the $2 at Sportsbet for JD to kick two or more goals on Friday looks like excellent value.

Even if the recovering Richmond players get through their tests during the week, we still think the Lions will win this contest. Lachie Neale and Dayne Zorko are back to their best in the midfield, while Harris Andrews is in All-Australian form in the backline. Good luck stopping Charlie Cameron this week, as the small forward should bounce back after a quiet game against the Saints.

Shai Bolton to get 25+ disposals

Shai Bolton has been one of Richmond’s best players this season, playing both forward and in the middle. The Tigers exclusively played Bolton in the midfield against the Magpies last round and he collected 26 disposals, which he can easily achieve again this Friday night. Bolton has amassed 25 or more touches in four games this season and should be around the mark against the Lions.

Joe Daniher will dominate in front of the goals this Friday night as the Lions break their horrendous losing streak at the MCG. Shai Bolton will lead the way for Richmond in the disposal tally, but it won’t be enough to get the Tigers’ season back on track.