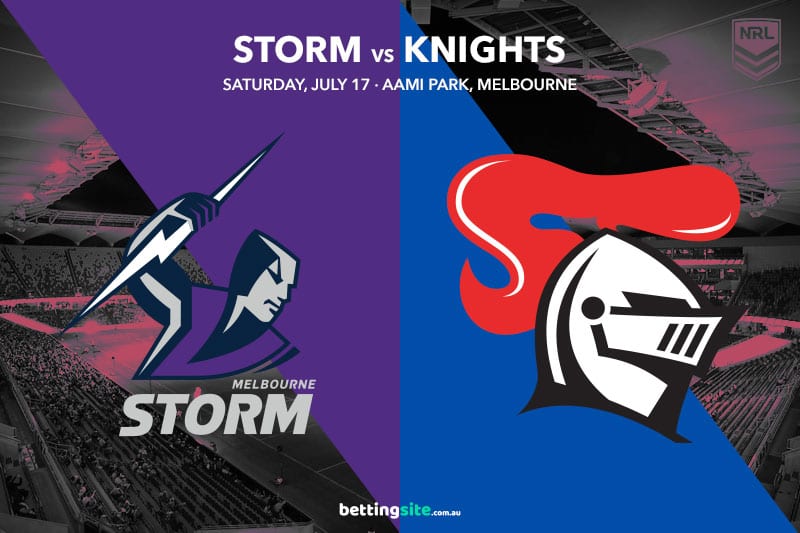 The Melbourne Storm will host the Newcastle Knights in Super Saturday’s main game, and there is a hint of irony in the scheduling.

On their run to the 2020 NRL Premiership, the Storm were locked down in Queensland due to COVID-19 ravaging Victoria. Now the 15 other NRL clubs are in the Sunshine State while the Storm have the advantage of being able to train and play at home.

The Storm are the $1.12 favourite this weekend on the back of some scary form. They’ve scored 40 or more points in four of their last five games and have named all of their State of Origin stars to back up from Game III. Ryan Papenhuyzen is still on the injury list as he recovers from concussion, but the form of Nicho Hynes has been such a revelation that they’ve barely skipped a beat without their first-choice fullback.

The Knights are starting to take shape and will be boosted by the return of Tyson Frizell from an ankle injury. Daniel Saifiti has also been named to play but is battling a rib cartilage complaint, so he will be a game-time decision. Considering Newcastle are basically at full strength, the $7.50 underdog price is quite extraordinary.

This Storm are on track to become the greatest attacking side in rugby league history. That is not hyperbole; it is fact. No fewer than 10 times this season have they scored 40 points in a game, which is already a record, and if they continue at their current scoring rate, they will finish with 912 points in a 25-game season. Parramatta in 2001 ended a 26-game season with 831 points, so Melbourne are on course to be almost a try per game better than the next best. Staggering.

The -19.5 line is big and Newcastle could put up a fight, but it will still probably get covered, such is the attacking arsenal the Storm boast. The 13+ margin for Melbourne will be backed off the map, but the $1.45 isn’t much to write home about. Josh Addo-Carr is the $6.50 favourite to score the first try, but Nicho Hynes at $12 might be one punters drift towards if they are after a bit more value. Jahrome Hughes at $2.80 to score at any time almost feels like a must, such is the season he is enjoying, so Jake Clifford and Lachlan Fitzgibbon will have to be switched on.

The Newcastle Knights have battled a long injury list and are starting to take shape as they head into the back end of the season. They are looking to win three in a row, but the odds of them doing that are remote; they have not won in Melbourne since 2015 and haven’t beaten the Storm anywhere since that same game.

There is plenty of appeal in Newcastle at the +19.5 line with their improved defence in the past fortnight, plus Kalyn Ponga at fullback means the Storm are going to have to be on high alert. Dominic Young scored a terrific double last week and is a good price at $2.50 to score at any time, but the best bet is Ponga at $3. While this game looks like a tough ask for the Knights, their last seven games are winnable and there should be some joy for them in the run home.

When Mitchell Pearce plays in 2021, the Knights are 4-2 and the eye test tells you they are far more formidable. The 38-0 demolition of the Cowboys last week was the first time Newcastle have been able to play their first-choice spine since Round 2, 2020, and they looked slick, but the defensive pressure is about to step up dramatically. On the other side of the scrum base, Jahrome Hughes is having a terrific season and has carved teams up with his dangerous running game. Both halfbacks hold the key in this contest. If Hughes has time to run, the Storm will run up a cricket score, but if the Knights move the ball as well as they did last week, they will have a bit of joy.

Melbourne will win, but Newcastle should do enough to cover the line. The improvement in defence on the edges for the Knights and another week of having their best spine means they’ll be competitive against the league’s yardstick.

Knights +19.5 with Nicho Hynes and Kalyn Ponga to both score at any time gives you a nice $11.50 three-legger.