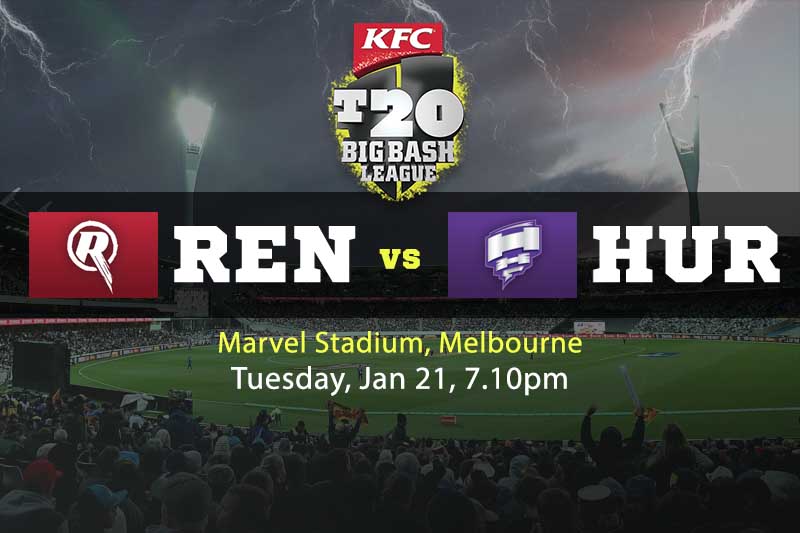 Can the Melbourne Renegades win back-to-back games when they host the Hobart Hurricanes? or will the Tasmanian franchise make a run for the finals?

You cannot help but feel sorry for the Melbourne Renegades, who won the BBL08 final last season and suddenly became the worst team ever, losing nine straight matches before stumbling to a victory.

The Hurricanes boast some of the league’s best players, but they have found it hard to gel and play well at the same time, leading to inconsistencies in their game.

Both teams have been unlucky to lose their best players to Austrlaia’s ODI series against India, where the Renegades lost their captain Aaron Finch and go-to fast-bowler Kane Richardson, whereas the Hurricanes lost one of the league’s best batsmen, D’Arcy Short.

Last time these teams met, it was the Hurricanes that pulled away with the victory, but with the Renegades hosting this match at Marvel Stadium, you never know what could happen. Here are our predictions for the Renegades v Hurricans BBL09 contest.

Playing as the fourth option behind Aaron Finch, Shaun Marsh and Sam Harper worked for Beau Webster early in the season, now that Finch has been replaced by Marcus Harris, Webster looks like he is trying to fill the void left by his powerful captain. Webster has made the seventh most runs out of every player in the BBL, and he will not slow down against the Hurricanes.

It was a brilliant return to the Big Bash League for Matthew Wade, making a very healthy 61 runs, but he has since failed to reach 20 runs. Wade needs to make a statement against the Renegades bowlers, who are not dangerous enough to topple him early. If the Hurricanes want to close out the season with dignity, they need to win this match with Wade as the star batsman.

With Kane Richardson playing good cricket in India, the Renegades were in need of a new fast-bowler, and Dan Christian decided he would be the one to step up and fill the role. Christian took three wickets from two overs in the most recent clash against the Sydney Thunder, which was the first Renegades’ win. Christian will certainly be given more opportunities in this week’s match.

Last time the Hobart Hurricanes met the Melbourne Renegades, the bowlers for the ‘Canes were very good, completely bowling out the Renegades. Nathan Ellis was one of the better bowlers on the day, as he comfortably took three wickets in his three overs. If the Hurricanes bowl Ellis four times, he should be able to take two wickets.

We’re predicting the Hobart Hurricanes to Win @ $2, simply because of their star-studded list, and the lack of form coming out of the Renegades camp. Although the Renegades won their most recent match, we do not think they were convincing when they did it. A lucky run-out took away Callum Ferguson and crippled the Thunder, which won’t happen in this match. The Hurricanes will beat the Melbourne Renegades this Tuesday.