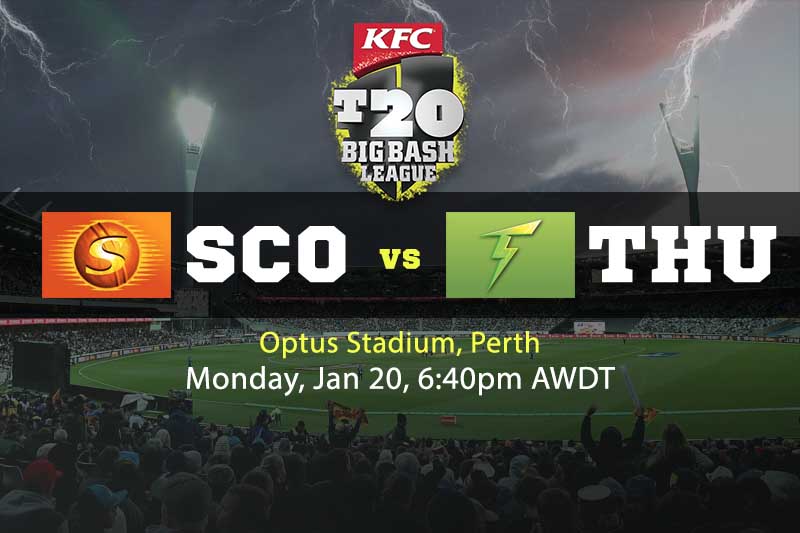 The Perth Scorchers will go in narrow favourites in betting when they host the Sydney Thunder in the Big Bash League’s second Monday night clash at Optus Stadium.

Both teams have had their ups and downs this season, with the Scorchers in good form entering this match, and the Thunder starting the season off in good form.

Winning matches at this point of the season is a great sign leading to the finals, as the top four teams will play for the BBL09 title in less than two weeks-time.

Playing each-other for the first time of the season, it is unknown how some players will fair against their opposition, especially the mercurial players like Alex Hales for the Thunder and Cameron Bancroft for the Scorchers.

With two of the most watchable captains in the BBL, Mitchell Marsh and Callum Ferguson, the Scorchers v Thunder promises to be a beauty, not to mention the great betting opportunities we have found.

With an average of 44-runs per game, Mitchell Marsh is clearly the most damaging batsman for the Scorchers. Having scored the third most runs in BBL09, Marsh is a proven superstar for his home state. With two 50s so far this season, Marsh will want to build momentum heading into the finals.

The former test player has been enjoying his time at the Sydney Thunder this season, making 247 runs from his 10 innings, but he has lost his wicket on each occasion. With the Perth Scorchers bowlers utilising pace, Usman will have a great time hitting the straight lines. Khawaja has a season-best of 66 and can score in a flurry, look out for him in this game.

Finding form late in the season when your teams needs it the most is something that only great athletes can do, and Jhye Richardson is building every time he plays. Now with only four less wickets than Daniel Sams, Richardson has reached what many expected of him early this season, but now he is achieving even more.

The top wicket-taker in BBL09 has been a force all season, consistently taking multiple wickets and threatening teams with his strange techniques. Sams has been the most fun bowler to watch this season as it looks like he’s being beaten, until he does take the wicket. We’re predicting Sams will pull through once again and take the most wickets for the Sydney Thunder, as he has done all season.

We’re predicting the Perth Scorchers to Win @ $1.80 with Ladbrokes, with their current form much better than their rivals. A newfound continuity in the Scorchers camp has made the team much better in the second half of the season, as the Scorchers are now pushing for a top two position. Winning this game is crucial for Perth and it will get over the line against the Sydney Thunder, who have only won two of their last six games.