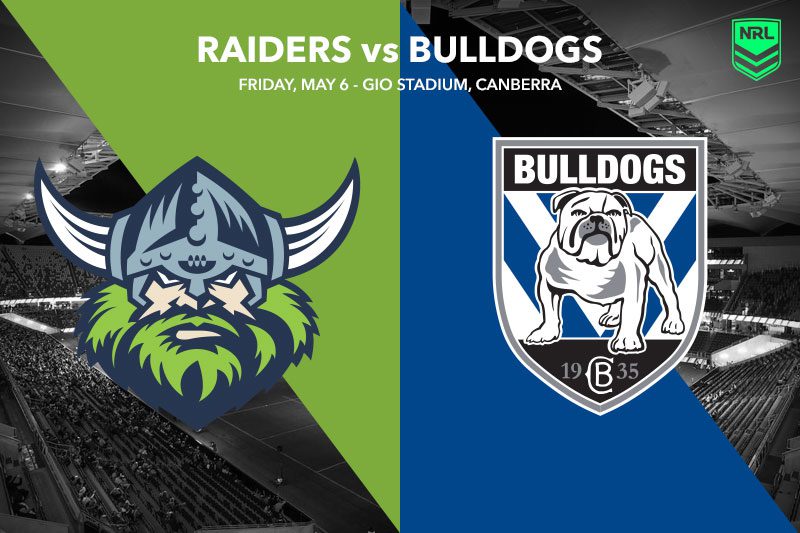 Friday Night Football in Round 9 of the 2022 NRL Premiership will kick off in the nation’s capital with the Canberra Raiders playing host to the Canterbury-Bankstown Bulldogs.

The two clubs had performances in their last start that were polar opposites, with the Raiders choking away another second-half lead while the Bulldogs stood tall to defeat the Roosters.

The book is out with Canberra and the ‘Faiders’ tag is well and truly appropriate. Their combined second-half score line this season 107-38 in the oppositions favour. Disgusting.

They start games well in the first 20 minutes but cannot break through the wall when the game is on the line in the second half of games.

Their yardage game falls through the floor and their opposition is safe in knowing that they’ll overcome them if they hang in, which is a horrible trait for a football team to have.

Part of it could be their bench rotations, which has included carrying Charnze Nicoll-Klokstad in the side and not using him for the last two games.

The other part could be the absence of an inexperienced halfback who can navigate those second halves better, which is not designed to be a criticism of Brad Schneider, but a rookie can only learn by taking these hits.

Jack Wighton has played well for the most part, but his talents aren’t that of a game manager and he isn’t equipped to guide a team through those moments.

His two-week suspension hasn’t shifted the markets with most sports betting sites just yet, but it would not surprise anyone to see the Raiders drift into home underdog status by kick-off.

What they do offer is some fun novelty options for punters who want to build a multi, which include backing them to score the first try of the game.

Punters will also be thrashing the half-time/full-time combo with the Raiders inevitably throwing the game away.

If you can get on the Bulldogs at more than $2 in the head-to-head market, load up.

They showed last week they can put together a stingy defensive performance and do enough with the footy to get some points on the board.

The opposition is without their best player and they’re low on confidence, so if ever there is a game Canterbury can smell blood in the water it has to be this one.

A man whose confidence levels are rising by the week is Josh Addo-Carr, who was instrumental in getting the Bulldogs out of the blocks well against the Roosters.

He is up to five tries for the year after starting slow, but his intercept before going the distance will be hard for Bulldogs’ fans to top as their favourite moment of the 2022 season so far.

The punters are slowly buying back into him as an anytime try scorer after he went the first five games without a try, but back-to-back doubles have restored order.

They will also get their skipper Josh Jackson back into the side after his COVID-19 isolation, and his experience could be the calming effect they need as they come into a game where many believe they should win.

The 1-12 point margin should be the play for Doggies fans, with around $3.30 on offer with the top online bookmakers.

Jack Wighton’s absence takes out some of the star power for this contest, but Tevita Pangai Jr and Joseph Tapine will make up for it in the middle of the field. Both men have good footwork and offloading skills, giving their respective teams an ‘X factor’ that could prove the difference on the night.

Canberra just can’t be trusted to get the win in this game, and we like the Bulldogs to make it two in a row. Matt Burton will score a try in the second half to lead the Bulldogs to the win.

Bulldogs 1-12 with Matt Burton and Josh Addo-Carr both scoring tries will get you $15.80 with Ladbrokes.