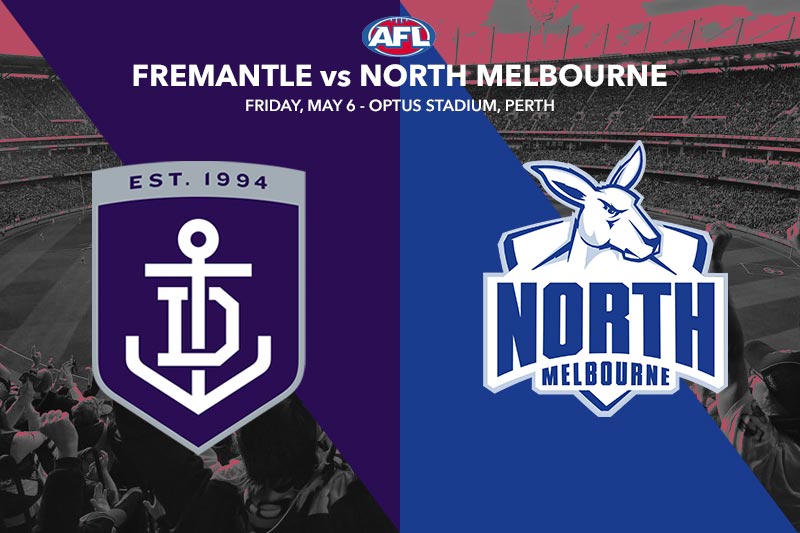 Can Fremantle keep their promising 2022 AFL season rolling with a win against the struggling North Melbourne at Optus Stadium in round eight this Friday night?

The Freo doubters were silenced when the Dockers beat the high-flying Cats at the Cattery in round seven. There was a consensus that Freo’s impressive results were courtesy of a soft early draw, and they would eventually get exposed by the top sides. But this team, playing without captain Nate Fyfe, showed they have the goods to make a deep September run. Freo held their nerve when Geelong piled on the pressure and beat the Cats at their own game. Young sides thrive on the confidence that can only come with winning games of football, and the Dockers will return to WA brimming with this priceless commodity.

The only real positive to emerge from North Melbourne’s defeat at the hands of Carlton was the competitive first half. The Kangaroos trailed by a mere nine points at the main break and were a quarter away from a close finish. Instead, the Blues got on top in the third and blew the lead out to 40 points before coasting to a 50-point margin at the final whistle. The Kangaroos desperately lack a midfield general who can direct the troops, accumulate over 30 possessions, and swing the game. This issue was thrown into stark relief by the performance of Patrick Cripps, who did just that for Carlton.

This game could get ugly if the Kangaroos defend poorly, so we are going to put an under-performing North Melbourne key defender in the spotlight. Josh Walker is 28 years old, 197cm and 98kg. In 2022 across six games, he averages 11 disposals, four spoils, four handballs, and seven kicks per week. These are not elite AFL numbers, unless he is working some magic off the ball. Fremantle key forward Josh Treacy is 195cm, 98kg, can take a great grab overhead and will need to be stopped from a North Melbourne perspective. Treacy is just 19 years old and still learning his craft but shows glimpses of promise.

The only question here is how big the margin will be when Freo are done manhandling the Kangaroos. The early line has been set at 45.5, which doesn’t offer a great deal of wiggle room. In fact, we are almost tempted to back the unders and hope the game is a defensive arm-wrestle, how the old Freo used to play under Ross Lyon. They’d kick 65 points and try hold their opponent to less. Instead, we’ll focus on the total points market here and take the unders at 161.5. If the Kangaroos fail to hit the scoreboard, Freo should be happy to cruise for the last quarter.

For value hunters we’ll link the total points bets under 161.5, into Michael Frederick 2+ goals, into Josh Treacy anytime goalkicker. This combo will return $3.85 courtesy of Neds. The absence of Taberner opens the door for the other Freo forwards to step up and show their skills.