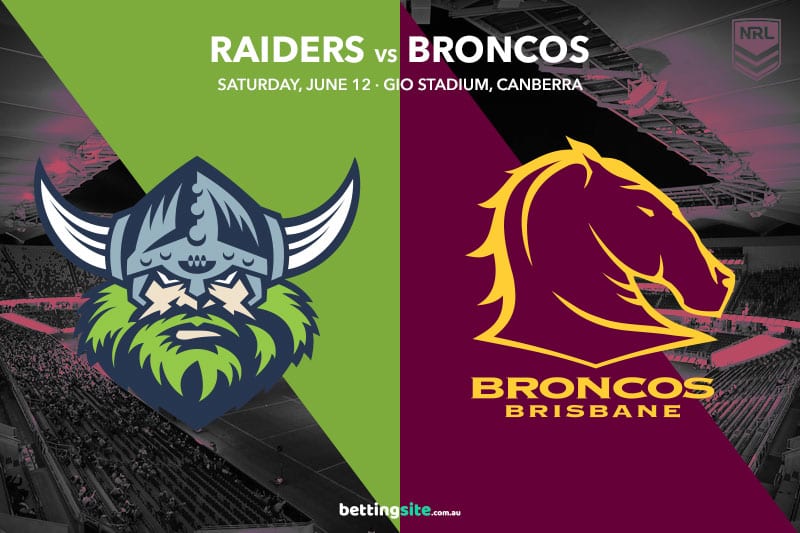 Another turbulent week off the field for the Canberra Raiders will have them determined to prove a point when they face the Brisbane Broncos on Saturday night at GIO Stadium.

Canberra have moved Bailey Simonsson to fullback with Semi Valemai to take the vacated wing spot, while rookie Matt Timoko will replace the suspended Curtis Scott. Josh Papalii will return from suspension and Joseph Tapine has been named on the interchange bench to return from a knee injury.

For the Brisbane Broncos, Karmichael Hunt will make the most unlikely return for the club where his magnificent career started, 12 years after he debuted as a 17-year-old phenom. He will play in the halves alongside Albert Kelly, while Herbie Farnworth will play at fullback in place of the axed Jamayne Isaako.

With rain and near-freezing temperatures predicted at kickoff, it is going to be a mammoth task for the Broncos to get the win away from home. Brisbane are 1-7 on the road this season, with their only away win coming in an upset against the injury-plagued Roosters three weeks ago.

Seeing Canberra at $1.39 with Sportsbet when they’ve lost seven of their last eight games should leave everyone flabbergasted. But perhaps the bookmakers have done their homework? Some 22 of the past 23 favourites in night games at GIO Stadium have won, so as bad as Canberra have been, it would take an unusual set of circumstances for them to lose.

Do the Raiders have it in them to win by 13 or more points? The vast majority of results around the competition this year have been big margins, so should we buy into that, or do we revert to an old-school thought that to get out of a form slump a team has to grind out a win? The $2.30 suggests the 13+ result is where Raiders fans should be placing their money. If you can’t be convinced either way, the -8.5 line isn’t a long one and the $1.90 makes for a good same-game multi option.

Brisbane had huge issues containing Matt Dufty last week, so does Bailey Simonsson have the same impact? The $14 is good value for him to cross first, but Sebastian Kris at $15 is our top pick in the first tryscorer betting.

The Broncos led 18-12 in the first half against the Dragons, but some inexplicable errors and a questionable sin-binning opened the floodgates. It showed just how little resolve there is in the group, and it isn’t something that can be changed within nine days. The $3.10 head-to-head price at BetOnline isn’t huge, but that is probably based more on how poor Canberra have been. In any case, it makes it a much closer betting game than it probably should be.

Finding a win for Broncos fans is going to be hard for this game, but a suggestion might be to take the overs on the total points line of 49.5. Both clubs have struggled defensively, and the last four games have between them have all gone overs on total points. Xavier Coates at $10 is a great option to score the first try; any time he is in double figures, it is hard to resist.

It isn’t the fullback battle anyone expected, but Herbie Farnworth and Bailey Simonsson are two talented youngsters who have been thrust into roles where they hold more responsibility. Simonsson is the son of a former All-Black and Farnworth spent time in the Manchester United academy as a youngster back in England, so both bring a certain sporting heritage to this clash. The game itself might be a non-event in terms of the title race, but seeing two of the NRL’s best up-and-coming backs in a playmaking role will make for interesting viewing.

Despite their ordinary form and off-field issues, Canberra should get the win at the 13+ margin. They will give up 20 points and could be forced into a game of touch football, which will no doubt frustrate coach Ricky Stuart but entertain the neutral fans.

We like the Raiders at the -8.5 line with Bailey Simonsson, Xavier Coates and Sebastian Kris to all score a try. Tie them all together for a $17.75 return at Sportsbet.com.au.