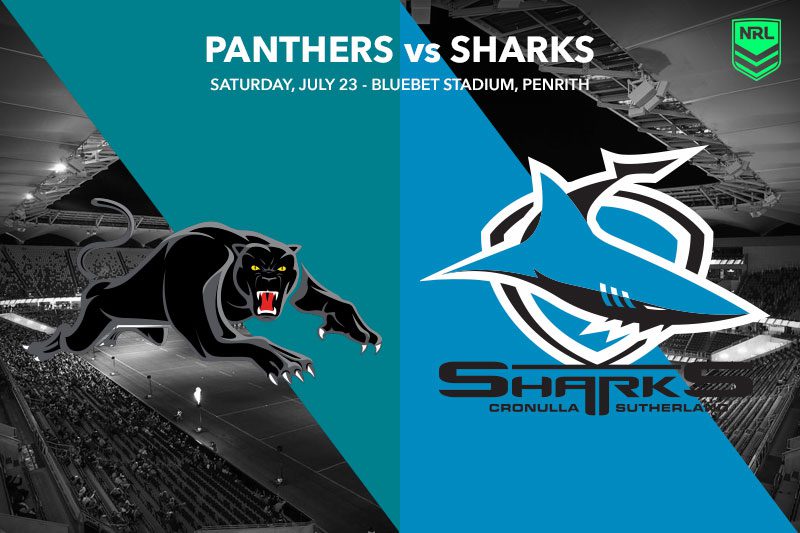 Super Saturday continues at 5:30pm AEST with another top-four clash, this time between the Penrith Panthers and Cronulla Sharks at BlueBet Stadium.

The Sharks staged one of the big upsets of round 18, beating the Cowboys in Townsville by 14 points. On the other side of the park, the Panthers came away with a late win over the Tigers at CommBank Stadium. Both sides are now building towards the finals series for 2022, and this is a serious test of the Sharks’ premiership credentials. Can they cause another upset win? Or will the Panthers continue their reign of dominance in Penrith?

The Panthers receive a major injection of talent into their starting line-up with all their State of Origin stars back from being rested. Captain Nathan Cleary is back with the likes of Isaiah Yeo and Apisai Koroisau, as well as one of Penrith’s impact forwards from the bench, Spencer Leniu. The Sharks have lost Sione Katoa to injury for the rest of the season, with backline utility Connor Tracey taking his spot on the wing.

Of 41 matches between these two clubs, Cronulla have been victorious on 23 occasions, including the last time these two sides met. That match was staged in 2021, with a Shaun Johnson masterclass taking down a Panthers side devoid of all Origin players. The two sides that take the field on Saturday are vastly different to the sides that played 12 months ago. With wet weather predicted for the weekend, that plays right into the Sharks’ strengths. Although they’re not expected to win, it should be a close clash. The Sharks are more than capable of coming within 12.5 points of Penrith, with that line paying $1.90 at BetOnline.

Given the weather predicted for the weekend in Penrith, the battle in the middle will be where this match is won or lost, and it’s where the tries will be scored. Viliame Kikau was a man possessed against the Tigers, scoring a try to go with a line break, line-break assist and try assist. Look for the left edge of the Panthers to be the main point of attack, with Kikau as the tip of the spear. He is a great value play to score a try at any time, paying $2.80 with the top NRL betting sites.

Scoring points will be incredibly difficult this Saturday, and field position and ball possession will be at a premium. The type of football played will be more conservative than expansive, suggesting the total points for the match will be low. This match should go well below the over/under of 40.5 points.

The battle of these two halfbacks will be one to watch. It won’t be as much about the fancy stats, like try assists and line-break assists, but rather kicking metres and receipts in play. These two will be working to control the pace of the game for their side, playing at a rate that makes the opposition uncomfortable. At the same time, their kicking games will be on display to make life as difficult as possible for the opposition to get out of their own end. Whoever manages this game better for their side will give them the best chance of winning.