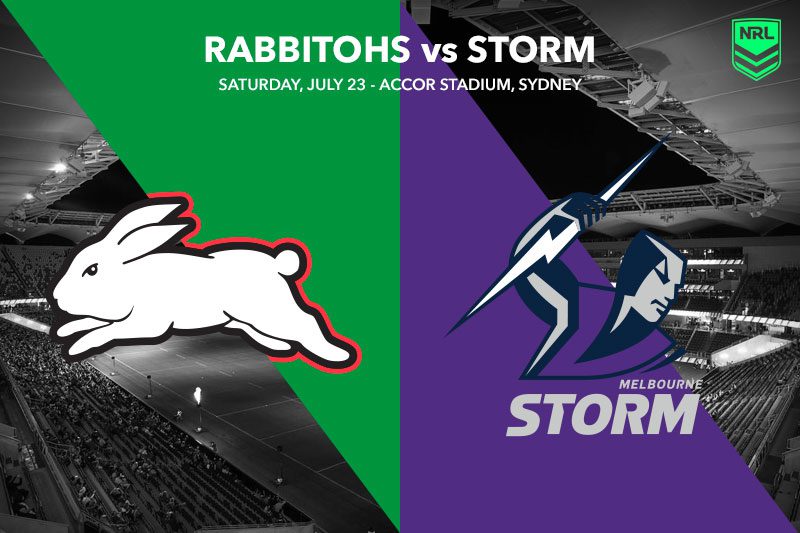 The South Sydney Rabbitohs will be looking to continue their hot run into September when they face off against the Melbourne Storm at Accor Stadium on Saturday evening.

The Rabbitohs have strung together three impressive wins, while the Storm are in the midst of their worst losing streak in seven years.

It might only be three losses, but the South Sydney faithful will fancy their chances of making it four.

The return of a driven Latrell Mitchell has been the catalyst for South Sydney taking off.

Before their bye they were embarrassed down in Wollongong, but since their superstar fullback returned they’ve been scoring points for fun – 40 against the Knights, 30 against the Eels and 36 against the Bulldogs. It is not a coincidence.

While Souths might be still leaking a few more points than they would like, you only need to cast your mind back to what they did last year.

When the calendar turned to August 1 last season they played nine games – including their run to the NRL Grand Final – and conceded just 13.8 points per game.

Up to this point in 2022 they’ve let in an average of 21 points per game, so expect the whips to start cracking on the defensive end now they’ve found their offensive mojo.

Traditionally, this has been a game where the Rabbitohs have stood next to no chance, having recorded just five wins in their history over the Melbourne Storm.

Luckily for them, the game will be in Sydney, where all five wins have been achieved, and against a weakened Storm side lacking confidence. Take the $2.02 odds at BetOnline about Souths and run to the bank.

Alex Johnston is just the easy pick in the tryscorer markets, but load up on Mitchell and Cody Walker to both get over the line. When they play together they’re an absolute nightmare, and they could prove too hard to handle for Melbourne.

The Storm have just lost their star fullback, have a crisis of depth in their outside backs, and their bench has three players most fans won’t know much about.

While they still have the likes of Cameron Munster, Jahrome Hughes, Harry Grant and a tough forward pack, it feels like there isn’t enough juice in this Storm side to get into a shootout with the Rabbitohs.

Nick Meaney is a fine player to replace Ryan Papenhuyzen at fullback, but the form Latrell is just about to hit will make that matchup too hard to overcome.

Since the Storm had their bye in Round 13, their best defensive effort was keeping the Roosters to 18 points. Their average points conceded per game is 24 since then, and the depth issues in the backline means there is too many minutes played by the likes of Marion Seve and Dean Ieremia.

How the online bookmakers have Melbourne as a $1.80 favourite for this game is beyond belief, as all the metrics aside from the previous head-to-head record are in the favour of the Rabbitohs.

These two are both capable of creating magic for their team, and the type of player fans pay good money to go and watch live at the ground. With Latrell returning, Walker is going to start hitting some of his best form, while Munster has the big-game qualities to drag Melbourne off the canvas to an unlikely win.

Get on South Sydney to win the game. Take the 1-12 margin at $3.10 purely out of respect for Craig Bellamy’s coaching and Melbourne’s overall determination as a club to keep the game close.

Rabbitohs 1-12 with Latrell Mitchell, Cody Walker and Alex Johnston to all score pays $30.99 at Ladbrokes.