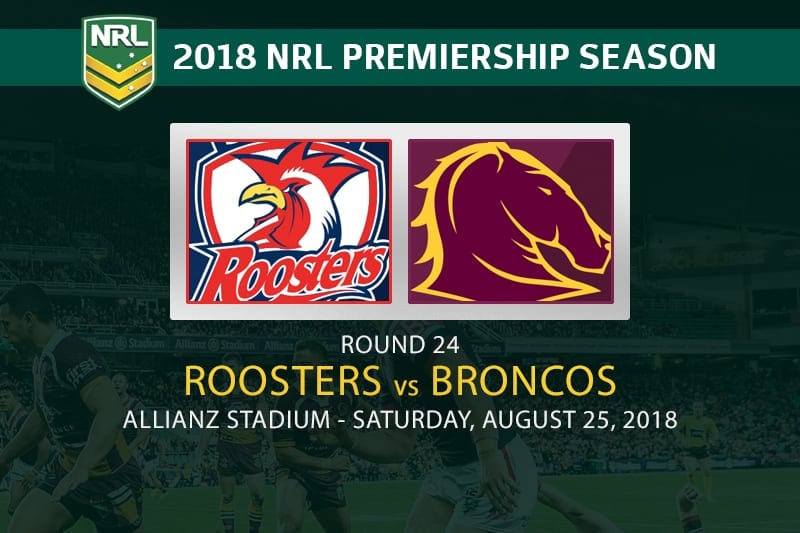 Kick off at Allianz Stadium from 7.35pm

Two of the NRL’s powerhouses lock horns on Saturday night as the regular season reaches its crescendo.

The Brisbane Broncos have made a habit of peaking at the right time under Wayne Bennett and this season looks to be no exception.

The Broncs smashed South Sydney by 20 points in a match that most expected the Bunnies to win. Finals now look locked away for Brisbane, and the men in maroon can now potentially finish as high as fourth if results favour in the final fortnight.

The Roosters missed a golden opportunity to lock away the minor premiership last week against the Canberra Raiders in the nation’s capital. The Green Machine clung to victory by two points despite scoring only one try compared to the Chooks’ two.

It’s all to play for both sides as a top-four spot is on the line.

The former Storm star needs to step up following last week’s shock loss to the Green Machine. The Sydney Rooster is a playmaker and match winner in his own right and we feel he would have been personally stung by last week’s defeat. Watch out for a big game from the veteran.

Queensland representative McGuire has been in great form in recent weeks, but he has the ominous task of quelling the influence of breakout star Victor Radley. If the gun lock can at least breakeven against Radley then we’ll be looking at a Broncos win.

Roosters vs Broncos – Who wins?

Can lightning strike twice for the Broncos in successive weeks? We’re thinking so.

It has taken a while for the engines to rev at full capacity for Brisbane but the Wayne Bennett juggernaut looks to be running at its optimum. The Broncos swept aside a legitimate premiership contender last week in such a manner that made pundits and fans alike sit up and take notice.

Are they a genuine premiership threat? Saturday night will tell the tale.

We reckon Wayne Bennett will have his lads fired up for a repeat performance and we’re tipping an upset in the heart of Sydney.