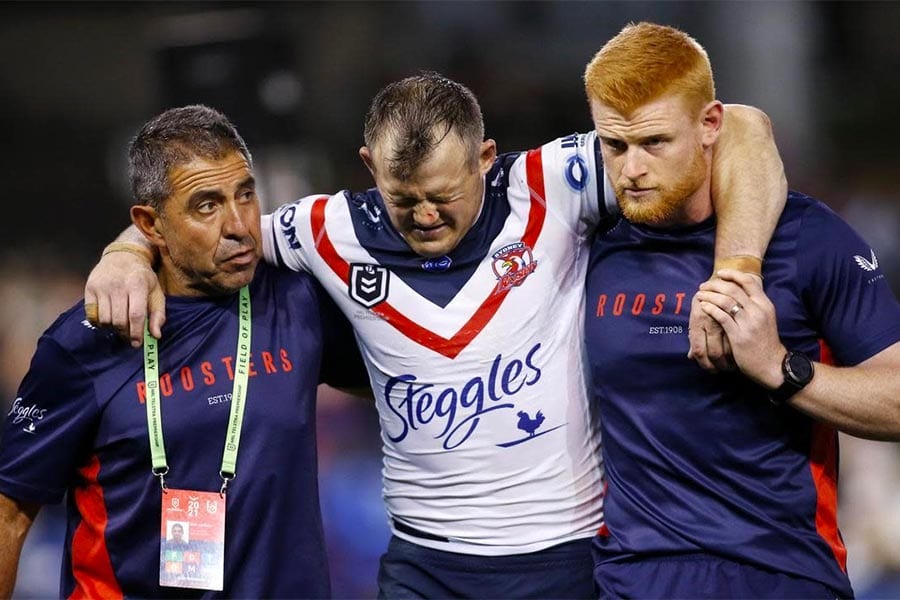 When a 22-point comeback on Friday Night Footy isn’t the biggest talking point of the round, something dramatic has happened. But a bit more about that later.

Round eight of the NRL 2021 season is going to be one for the history books in the ‘on this day’ category. Brett Morris’ career appears to have ended with a heartbreaking ACL tear, while Sam Walker at 18 years old in just his fifth game produced a record-breaking five try assists. The Roosters’ 38-4 win was one of the more bittersweet results you’ll ever see, and it saw Newcastle reach a crisis point.

The word ‘crisis’ feels like a good segue into the record-breaking comeback from the Brisbane Broncos. Down 22-0 after just 13 minutes, they managed to beat the Titans 36-28 and completely change how many of us feel about the Gold Coast.

The Dragons slumped to their third loss in a row, and now they are looking more like the team many predicted in the preseason. The mid-table is shaping up as an entertaining race which will no doubt go all the way to round 25.

Let’s take a look at how the rest of the week’s NRL action unfolded.

If the South Sydney Rabbitohs could produce their second-half efforts before the interval as well, they might be the runaway favourites to win the title. When they click into gear they are absolutely breathtaking to watch, but they are taking too long to warm to the task.

The Canberra Raiders were gallant in defeat and never stopped trying right until the final whistle, but they’ve now lost four in a row and have hit a mini-crisis. Thankfully, there are 16 games remaining in the regular season and plenty of teams around them who haven’t been able to take advantage of their slump.

The Rabbitohs at the -5.5 start was an easy way to get the ball rolling for the weekend, while we just missed our same-game multi with Cody Walker not scoring a try.

The Cronulla Sharks dominated possession and territory for long periods of the game down at AAMI Park, but it doesn’t paint a good picture when they led early in the second half and still no one expected them to go on and get the win. To lose in the fashion they did wasn’t surprising, but how it unfolded would have left a horrible taste in their supporters’ mouths.

The Melbourne Storm interchange bench deserve all the credit for this victory. Harry Grant, Dale Finucane and Tui Kamikamica came on with the Storm struggling to find their groove, but the energy they bought completely turned the tide.

The 13+ win should be backed routinely for Storm games at AAMI Park this year; they have won more than 74% of their games there since the venue opened in 2010. We fell short of the Josh Addo-Carr double prediction, however, with Reimis Smith instead getting a hat-trick.

You would have to travel a long way to see a stranger game of football, but my goodness, it was entertaining. For the Gold Coast Titans to be leading 22-0 after 13 minutes and lose 36-28 to a team who have only beaten the Bulldogs since the COVID lockdown break of 2020 is embarrassing. There is no way you can sugar-coat it. The Titans have now lost three in a row and have shown enormous vulnerabilities defensively.

Still, credit to the Brisbane Broncos. Through Jamayne Isaako and Tevita Pangai Jr in particular, they were able to get back into the contest and level it up by half-time before going on with the job in the second half thanks to a controlled performance from new halfback Tyson Gamble.

The result in this game would have ruined a lot of tips. We did suggest getting the Broncos at the +12.5 line and coupling it with Xavier Coates to score at any time, so hopefully some Brisbane fans got amongst that action.

Manly were the first team this season to score more than 12 points against the Penrith Panthers, but it still wasn’t enough to get the win. The league leaders made a fast start, but after that the Sea Eagles got into the grind with them and scrambled superbly in defence on a number of occasions to make them work the hardest they’ve had to in a game since round three.

The final result was never really in question, but a 73rd-minute try to Jason Saab meant the Panthers had to close the deal and deliver one final blow, which they did with a Stephen Crichton try in the 77th minute. Had Nathan Cleary kicked 5/5 and not 4/5, we’d be celebrating a $15 return on our 14-point margin prediction, so understandably we are shattered.

So it turns out the Bulldogs are still awful at rugby league. Their lone win for 2021 didn’t inspire much confidence, and from almost the kickoff, the Parramatta Eels never looked like losing the game. When Dallin Watene-Zelezniak scored in the 54th minute to bring the margin back to 12 points, there was a contest of sorts for a brief moment until the Eels closed the deal and ran away with their third consecutive win by more than 20 points.

Of course our two-leg prediction of Maika Sivo to score the first try and Clint Gutherson to score at any time was flipped around, but well done if you had Gutherson at $9 to score the opener. We gave too much respect to the Bulldogs, who couldn’t cover the +19.5 line.

It almost feels wrong to talk about this game. The scenes of Brett Morris crying with his twin brother Josh following an ACL injury at 34 years old were some of the saddest NRL fans have ever witnessed. That Lindsay Collins did the exact same thing only moments earlier only compounded a horror injury toll for the Sydney Roosters, who will be looking for players at the Bondi Junction train station this week.

The Knights were beyond disappointing in this game (they conceded a try when the Roosters had only 11 players on the field), but not enough can be said about the phenom Sam Walker, who had five try assists to set a Roosters record in just his fifth game. The Sydney 13+ margin prediction at $2.80 was the easiest money made all season for those who were smart enough to follow suit.

It sounds silly to say, but the North Queensland Cowboys just ran out of time in their 24-20 loss against the Warriors. Faced with a 24-4 deficit at half-time, North Queensland were fantastic in the second half and should have won the game. The Warriors spent the second stanza camped on their own line and somehow got the vital two points, thanks in large part to a fantastic display of attacking football in the first half.

We might have got the margin and winner wrong in this game, but another Cowboys game has given us a big winner in the tryscorer stakes. Reece Robson has provided some joy already in 2021, but a $6.50 return was more than enough to heal the wounds of missing out on the other markets.

When the season gets to the business end, this loss is going to haunt the St George Illawarra Dragons. With a healthy home crowd behind them and an opponent in the middle of their worst start to a season in history, they had a win waiting for them on a platter. To only score in the eighth minute of the game was a huge disappointment for the Red V.

Credit where it is due for the Wests Tigers, their defence was terrific and a huge improvement on what they’ve dished up in recent weeks. Adam Doueihi and Daine Laurie were the standout performers and ultimately proved the difference, and if there is to be a surge up the ladder, it will be these two youngsters who spearhead the rise.

A stirring Tigers win, as good as it was, proved to be awful for tipsters and punters in this game. All our recommendations were on markets revolving around a Dragons win.