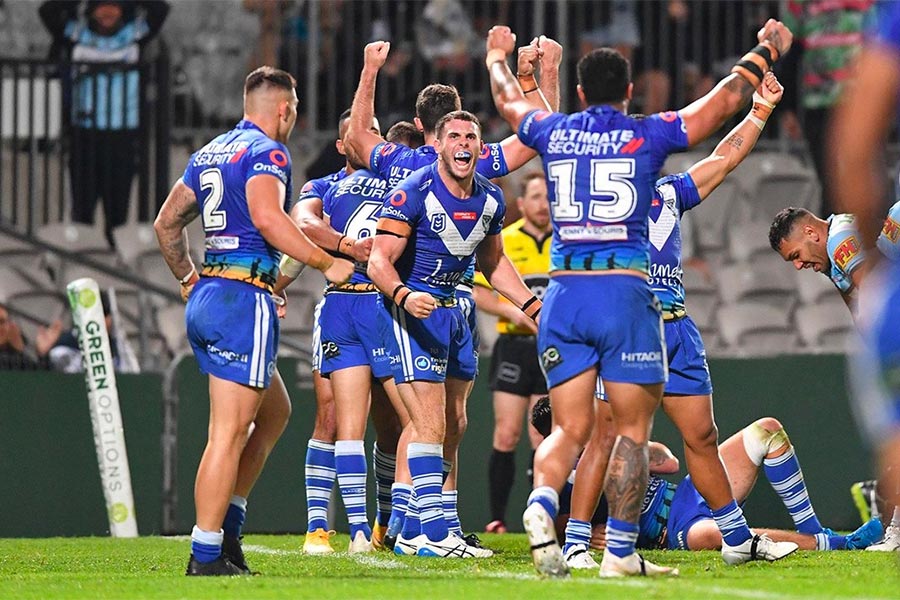 Round seven of the 2021 NRL Premiership saw two sides take a big step back to finals contention, while it left the Wests Tigers in crisis talks about who should be their head coach moving forward.

The Sydney Roosters reminded the whole competition why they will continue to be a force to be reckoned with, but the Canberra Raiders are beginning to fall into the ‘overrated’ category after losing their third-straight game in demoralising fashion.

The NRL ladder has taken on an unusual shape after seven weeks of footy, with six teams sharing an identical 3-4 record and the 13th-placed Sharks boasting a positive for-and-against.

Tipping has become harder than it was in the opening rounds of the season, and we are guaranteed to see some more shockers in the coming weeks.

Let’s look back on what was a huge round of NRL footy.

For a large portion of this game the margin was just four points, but the Penrith Panthers were never in any danger of losing. The left edge had their way with the Newcastle Knights; Jarome Luai looked a threat with every touch, and it felt as though he could have had four or five try assists. The Knights tried valiantly and competed far longer than many thought they would, but in the last 15 minutes the game ran away from them.

The sad reality for many in this game is a betting win came down to a simple kick for goal by Nathan Cleary minutes before full-time. The -17.5 line had plenty of Penrith fans nervous for 65 minutes, and those who took the Knights at the line were feeling confident. Of course, Cleary kicked it from the sideline and broke the hearts of those banking on the Knights to cover.

Now this game had it all! A try of the year contender, a second David Fifita hat-trick for the season, and a Benji Marshall performance from a decade ago to pull the South Sydney Rabbitohs out of an enormous hole at half-time. A 24-10 deficit kicked Souths into gear, and they ran out 40-30 winners in what was one of the most entertaining games from start to finish over the last few seasons.

We said earlier in the week that the Rabbitohs would need to score in the mid-30 range to feel safe, and we proved to be bang on, but the best result from this game was our recommended multi at $12.25 (Rabbitohs -6.5, David Fifita and Cody Walker to score at any time) getting up. We hope everyone got a nice return from that combination.

Some believed the Brisbane Broncos had turned a corner in recent weeks, but a 46-6 loss had coach Kevin Walters in a foul mood. The Mitchell Moses hype train is picking up enormous momentum, and he once again turned on a terrific performance – and scored a try as predicted – while Maika Sivo snagged a hat-trick on the left touchline. Just when we thought it couldn’t get any better, Isaiah Papali’i crashed over for another try and repaid our faith in the Eels’ new cult hero.

There was a moment where the game was competitive in the first half like we predicted, but the -13.5 start for the Parramatta Eels was an absolute gimme. Our guy Xavier Coates didn’t score his customary try, and it dearly cost those who got on our multi.

We hope all you long-suffering Canterbury Bulldogs fans enjoyed that win, as it could be the only one they get all season. An 18-0 lead heading into half-time looked like it might get run down in the final moments, but they hung on and defended their goal line grimly in an effort that reduced coach Trent Barrett to tears.

Just where Cronulla’s season goes now is an absolute mystery, as they have given up two games they could have easily won. The board more or less gave up on the season a fortnight ago, but will the players fight and make something of this campaign?

As awesome as the upset was, almost everyone who had a wager on this game would have lost. We didn’t even get remotely close to backing any tryscorers in this contest, but we did believe the Bulldogs could cover the +16.5 line, and they had us counting the money by half-time.

As if the first game on Super Saturday wasn’t a big enough upset, the North Queensland Cowboys decided to get in on some of the action. The Canberra Raiders looked as though they’d finally found some form as they took a 24-6 lead into the half-time break, but how they managed to be outscored 20-0 in the second stanza has left many analysts and fans with huge concerns about the Green Machine moving forward.

The Raiders being as short as they were in the NRL betting markets never made any sense, so we found plenty of joy even though we didn’t expect the Cowboys to actually go on and win the game. We did like the 1-12 price for the home team at $4.50 as a brave option, and it showed us that sometimes you have to just go with your gut. And speaking of gut feels, did anyone back Benjamin Condon to score at $7? It’s never felt better to get a roughie across the stripe.

Much like the Cowboys, the Manly Sea Eagles have flipped their season on its head with three consecutive wins. They were down 6-0 for most of the first half, but Tom Trbojevic imposed himself on the contest in a 10-minute blitz that set up a huge 40-6 result. If someone told you how bad this team was a month ago without their star fullback and you’d not seen the manner in which they were losing, you’d question everything you ever knew about football. Tommy Turbo is close to the game’s best player when fit, but he is also proving beyond a shadow of a doubt that he is clearly the most valuable.

We should apologise for not giving Luciano Leilua enough respect after only recommending the $4.60 price for an anytime try instead of taking him as the first scorer for the game. Unfortunately we gave the Tigers too much respect, as our 1-12 margin bet for Manly was a miss. It’s the first time in Wests’ 21-year history they’ve had just one victory from their first seven starts.

An ANZAC Day scene at the SCG is one of rugby league’s great sights, and for Dragons fans, that was about as good as the afternoon got. A few punters thought the upset was on for this game, and an early 6-0 lead had them feeling vindicated, but the manner in which the Roosters went about picking them apart for a 34-10 win was impressive. With Sam Verrills now back and Sam Walker being as good as advertised, they are going to come out of this four-week patch of big-name outs in reasonably good shape.

St George Illawarra have hit their first snag of the year and now have back-to-back losses from two insipid performances. How does Anthony Griffin get their middle firing again? If this is where they are headed and their good start was just a blip on the radar, it will be a long year.

Sadly for Warriors fans, this one went exactly how it was supposed to. They never looked like making this game a contest, and Jahrome Hughes tore them to shreds in the first half to put the game to bed in quick fashion. The -16.5 start for the Melbourne Storm proved to be an easy way to double your money, but we couldn’t find any tryscorers at juicy odds in this game.

The Warriors now face the prospect of taking on a reinvigorated Cowboys side. A month ago that looked like a guaranteed two points, but the sudden form reversal for both clubs has made it a potential make-or-break situation for the New Zealanders.