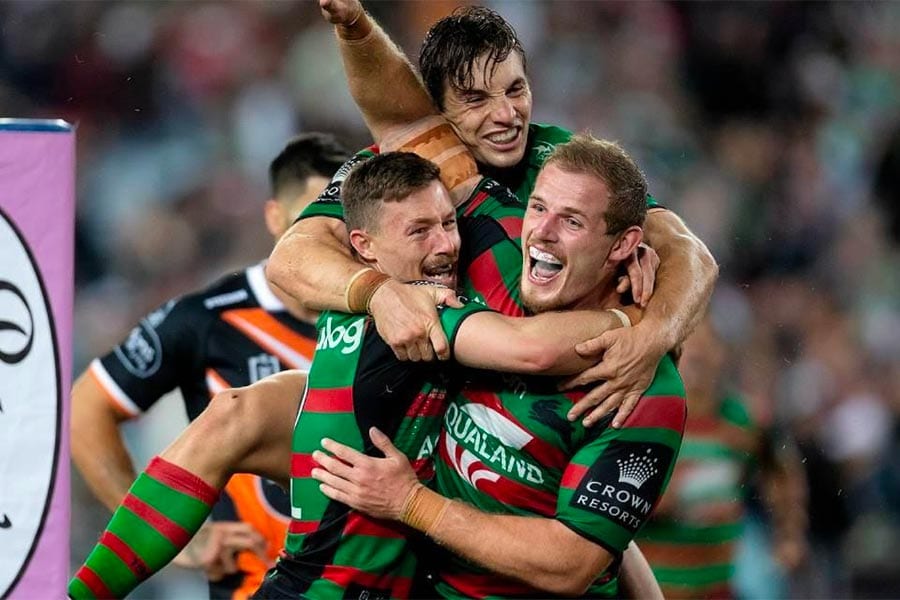 Round six of the 2021 NRL Premiership saw one of the most inconceivable finishes to a game of footy you’re ever likely to see between the Wests Tigers and South Sydney Rabbitohs, while the Penrith Panthers survived a massive scare to extend their regular-season winning streak to 21 games.

The struggling Brisbane Broncos couldn’t quite complete what would have been the biggest upset in NRL betting history, but they’ve restored some hope among their fans for the weeks ahead. Meanwhile, the New Zealand Warriors underlined why they will be a nightmare to tip this year.

Among some of the other notable events from the weekend were Kalyn Ponga playing his version of Michael Jordan’s legendary ‘Flu Game’ for the Newcastle Knights to break Cronulla hearts, and the Parramatta Eels ending their 15-year drought in the ACT by thumping the Canberra Raiders.

Let’s relive the round that was.

Brisbane coach Kevin Walters revealed after losing 20-12 to the Panthers that his inspirational speech to get his players up for the game was simply “have a go or get out”. Sport is a simple beast at times, and it proved that way as Penrith were given as good a challenge as they’ve received in 18 months. They didn’t play poorly, and it was more a case of just how well Brisbane played before the experience and guidance of Nathan Cleary got the Panthers home in what turned out to be one of the games of the season. Obviously, with such a shock performance by the Broncos, the -27.5 line the online bookmakers had for the Panthers was blown apart. If Viliame Kikau had crossed and not Kurt Capewell, our $64 multi would have hit and yours truly would be in retirement.

The NRL betting markets for this one swung wildly through the week due to the unceremonious sacking of John Morris, but fans were treated to an absolute classic finish between the Newcastle Knights and Cronulla Sharks. Playing in discomfort with a stomach virus, Kalyn Ponga turned in one of the best performances of his career, scoring two tries – including the match winner – and playing a role in three others. Cronulla put in a terrific second half to take the lead and looked as though they were going to steal a win, but they conceded two tries after the break despite having to defend only four tackles in their red zone. Our tip for Ponga and Jesse Ramien to be on the score sheet came through, and with a bit of blind faith we got the 1-12 result for Newcastle.

The Melbourne Storm looked like their old selves with Harry Grant and Ryan Papenhuyzen running riot in a 20-4 win over the Sydney Roosters. The Chooks had plenty of appeal at more than $3 in the head-to-head betting, but 15 errors at AAMI Park is never going to get the job done. On top of that, Victor Radley was sin binned for a high tackle on Cameron Munster in the first half, and Sydney never really recovered from the enormous pressure that put them under. The +8.5 start for the Roosters looked a gimme, but we were proven wrong as the Storm got their first win over a big-time opponent for 2021.

Did the Titans fall into the Bermuda Triangle between Robina and Mudgee? After such a dominant win over the Knights the previous week, they let themselves down on the road once again with an absolutely disgraceful display. The Sea Eagles are the biggest one-man team since the Andrew Johns era of the Knights, but my word, what a difference Tom Trbojevic makes! He was unstoppable in the first half as Manly made linebreaks at will, showing why many believed they could be a top-eight team if healthy. Our prediction of Tommy Turbo scoring a try was about all we got right in this game, which was just one of those ones that completely goes against the grain.

Only the Wests Tigers could lose in this fashion. Holding an eight-point lead against a fully loaded South Sydney Rabbitohs with 16 minutes to play, they managed to give up a two-point field goal and were forced into golden point. In extra time, they over-chased on the field goal and left an enormous gap for Thomas Burgess to run through and ground the ball in suspicious fashion. Luke Brooks picked the ball up and ran 100 metres to score what he thought was the winning try while 13 Rabbitohs players celebrated. The try was awarded to the Tigers, and for a brief moment they had the upset win, but on review, Burgess had grounded the ball cleanly, so the points were taken off the Tigers and given to the Rabbitohs. This actually happened, and we will happily forfeit all our bets from that game for that finish.

The 15-year drought for Parramatta in the ACT is finally over, and the manner in which they won the game was emphatic. What was a sensational contest in the first half turned into Parra-dise for Eels fans in the second half as they scored 23 unanswered points. The Raiders’ loss was their biggest at home in three seasons, and it will force them to re-evaluate things after a rough fortnight. Their forward pack is so deep it’s left them playing some weird bench rotations, and they’ll have to make some tough decisions as the season goes on and the stakes get higher. We got the $5 for George Williams to score a try, but the Eels were just far too good and spoiled the rest of the party.

The streak is over, and the NZ Warriors prove once again why they are a punter’s worst nightmare. They weren’t overly adventurous, but they completed a perfect 40/40 sets of six to upset one of the competition’s surprise packets and get their third win of the season. We selected two out of three Dragons tryscorers with Mikaele Ravalawa and Matt Dufty both crossing but missed out on Zac Lomax completing the treble. We did, however, get the predicted double of Dufty and Roger Tuivasa-Sheck scoring a try at $5.50 to kickstart a terrific Sunday afternoon.

An error-riddled first half from both sides picked up dramatically after the break as the Cowboys ran out 30-18 winners, yet back-to-back wins wasn’t the biggest talking point of the game. Bulldogs prop Jack Hetherington was the first player sent off in a game for 2021, and his bad disciplinary record means he could miss several weeks for his old-fashioned coat hanger on Valentine Holmes. A comeback from the 12-man Bulldogs helped our Cowboys 1-12 prediction get up, and our Kyle Feldt first tryscorer tip proved to be bang on. He crossed moments after Murray Taulagi, our other option, missed two opportunities to get over the line.