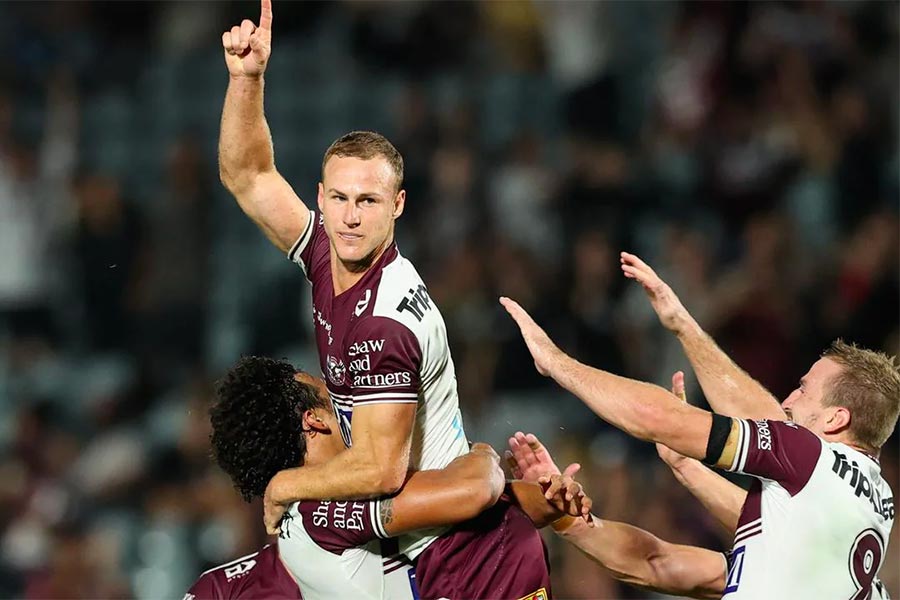 The 2021 NRL season has been dogged by controversy surrounding rule changes that have led to lopsided scorelines, but we finally got some upset wins and a few close games in round five.

The Rabbitohs, Panthers, Titans and Storm all secured wins by at least 20 points, but we got a 79th-minute field-goal win to Manly, a Roosters point-scoring flurry to pull the game out of the fire, a dazzling Cowboys display at Leichhardt and a statement win from the Dragons to wash away the dreary week we all endured in round four.

Let’s see where we got the cash and bit the dust over the weekend of footy.

This was a case of proceedings going exactly as everyone expected, but we did get the first two-point field goal in 50 years, so that’s something to hang our hat on. Brisbane had a few moments in the first half where they looked decent, but they never threatened to take the game away from the South Sydney Rabbitohs, who covered the big handicap with ease as predicted.

Sadly, Xavier Coates finally stopped scoring tries, and it cost us the tasty $2.85 return on our same-game multi. Alex Johnston and Latrell Mitchell both crossed, and those two – along with Cody Walker when he returns from suspension – look like reliable options week after week in the tryscorer betting.

For the Broncos, the improvement in Jamayne Isaako is quickly turning him into one of their strike weapons out wide, so punters will need to give him some respect in tryscoring bets moving forward. Regardless, the Brisbane will continue to have huge handicaps put against them by online bookmakers.

Addin Fonua-Blake being ruled out for the season on the eve of this contest was a crushing blow to the NZ Warriors, and his old club simply found a way to get two points. It was a game that didn’t get to any great heights, but with Tom Trbojevic’s return imminent, the Manly-Warringah Sea Eagles at the very least have something to build on for the next month.

Ken Maumalo was moments off proving us right by crossing for the Warriors almost immediately after Jason Saab opened the scoring, but our Warriors -7.5 prediction was left in tatters thanks to a gritty Sea Eagles performance capped off by a Daly Cherry-Evans field goal.

The Penrith Panthers have now won 11 in a row at BlueBet Stadium and 10 consecutive games on the road, while last year they had a total winning streak of 17 games. They are quickly racking up records, and another strong win over a contender only made their case for the 2021 NRL Premiership title even stronger.

Penrith’s start was rough, but once the Raiders gave them an opening, they kicked the door down and got the 13+ margin. Brian To’o is quickly becoming an automatic tryscorer pick, while a Charlie Staines double also showed why we love getting him in our NRL betting predictions.

Unfortunately for the Raiders, you need to have all your horses when you take on Penrith, and losing Charnze Nicoll-Klokstad to a HIA ruined any chance of the $4 return we were after.

Some rotten luck on the Friday games quickly turned around on Saturday afternoon, thanks to a dreadful showing from the Newcastle Knights. The kickoff that went out on the full to start the game was a perfect appetiser for what was to come, and the Gold Coast Titans did what good teams do and took care of what was always a ‘gimme’ win.

AJ Brimson had another day out and upstaged a returning Kalyn Ponga, while the hat-trick to David Fifita must have left the entire NRL shaking in their boots. The -8.5 start was done and dusted within minutes, and while we did think 13+ margin was a possibility, we did not anticipate that it would be obliterated in this manner.

We did get a nice earn with Ponga scoring in the 68th minute, but that was just about the only bright spot for the Knights, who all of a sudden have lost three in a row and face a horror run. Their season is quickly getting away from them.

Canterbury-Bankstown came into this game as one of the biggest outsiders in NRL betting history, and despite scoring for the first time in a month, they did about as well as expected against the Melbourne Storm.

It’s tough going when a player like Dallin Watene-Zelezniak is $6 to score at any time, but any Bulldogs fans brave enough to get on him would have cheered a 34-point hiding like a Doncaster Mile winner. The Ryan Papenhuyzen market did see a win, with the $1.40 return on him to score more points than the Bulldogs getting up right on full time. The -27.5 line was never in any danger, and Josh Addo-Carr crossing in the 71st minute also meant we gave you a winning two-leg same-game multi.

The Bulldogs at least have the monkey off their back by scoring 18 points. They will have a good chance to secure a win against the Cowboys in round six, but after that it will be slim pickings on the schedule.

A Sam Walker-inspired comeback in the final 15 minutes was a fantastic story from a terrific game on Saturday night, but Brett Morris getting a double as we predicted at $4.33 was the cherry on the cake as the Sydney Roosters snatched the win.

Cronulla looked poised to end their losing streak against top-eight sides, but they fell apart down the stretch to lose by eight points and ruin our 13 plus prediction. We did like Mawene Hiroti as an anytime tryscorer, but well done if you backed him to get across first – you only needed to wait two minutes to get your collect.

When Luke Keary went down with an ACL injury there may have been a few punters who ripped up their ‘top-four finish’ tickets, but the form of Walker in his first two games should have fans trying to sticky tape them back together. This kid is a seriously gifted halfback.

A sunny Sunday afternoon at a packed-out Leichhardt Oval… of course the Tigers produced a garbage first half to trail 28-6 against a North Queensland Cowboys team who had offered nothing so far in 2021.

The chip-and-chase tries to Hamiso Tabuai-Fidow and Scott Drinkwater had the neutrals falling over themselves, while Murray Taulagi had his brightest moment in the NRL with a spectacular effort off a bomb. They looked like the Cowboys many had hoped for under Todd Payten.

We got Luciano Leilua and Tabuai-Fidow as anytime tryscorers, but we can only imagine how much punters lost on this contest. The Cowboys were $5.75 just before kickoff and were forced to win the game for a second time after a Tigers revival, but they held firm and caused the biggest upset of the year so far.

No one thought Anthony Griffin’s appointment as head coach of the St George Illawarra Dragons was a good decision at the time, but they deserve our respect and attention after a big win over the previously undefeated Eels. That’s now four-in-a-row for the Red V, and this one came against a club many rate as one of the competition’s best.

The Dragons were huge odds at the start of the season to just make the eight, but those numbers are coming down by the week. We thought they were decent value at the +9.5 line, and that proved to be a very conservative assessment. The 2021 campaign has dished up far too many non-contests so far, but we finally we got a Sunday afternoon where two clubs as despised outsiders got the two points.