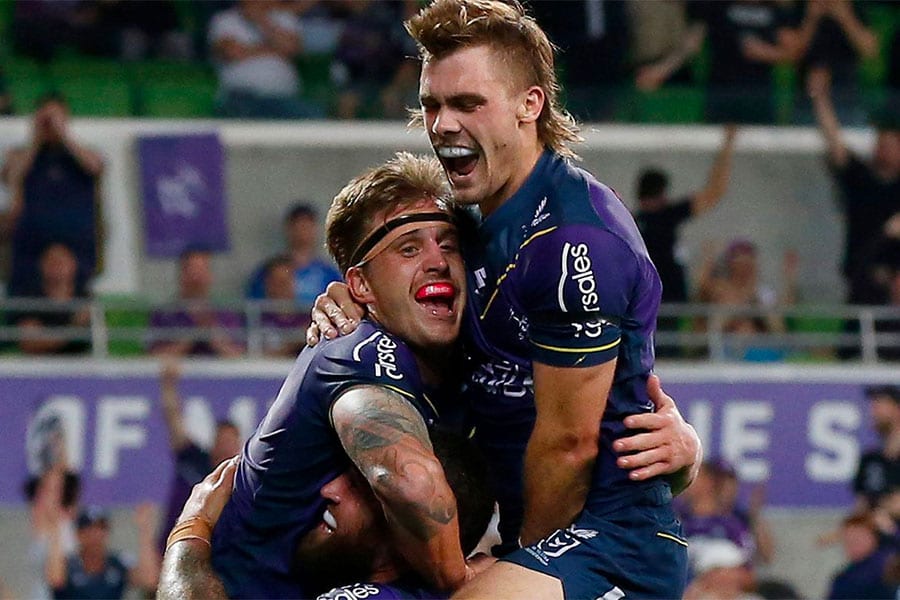 The opening month of the 2021 NRL Premiership saw the gap between the top and bottom clubs widen, and the numbers are alarming.

Just two weeks ago, the average margin of victory was 13 points. In round four, that figure blew out to 26. Some will say it’s a small sample size and it just so happened all the teams who have been abhorrent took on premiership contenders, while others will say the league is getting bent out of shape.

Only 10 of the 32 games played so far have been decided by single digits, which completely goes against the grain of the classic ‘it’s the closest competition in the world’ take you hear from pundits.

Why are we banging on about margins of victory? Mathematics, of course – not the health of the competition so much, but more that of the NRL betting markets. If round four is a sign of things to come, every game should be put in the 13+ margin category.

Tom Trbojevic is great, but not even he can save the Manly Sea Eagles single-handedly. The first 25 minutes of this game was a training run for the Panthers, and the right edge of Manly wanted absolutely nothing of what Viliame Kikau was dishing out to them.

It is going to take an extraordinary effort to deny the Penrith Panthers the premiership, as they have now equalled the NRL record for consecutive away wins (10) to go along with their historic winning run of 2020. The result in this one was never in doubt at the line, like we predicted, and our method of backing each Panthers winger to score first also saluted with Brian To’o going over for the opener.

To be just the second team in history to go three straight weeks without scoring a single point is going to drive Canterbury Bulldogs fans away. How long must the suffering go before the light at the end of the tunnel appears? Once again, they never looked like scoring a point while the Bunnies ran them in for fun.

The South Sydney Rabbitohs are getting better by the week and look set to go on a long winning run. The left edge again did the business, with Latrell Mitchell, Cody Walker and Alex Johnston all scoring as predicted for the second time in three weeks, and the line was taken care of comfortably.

The Brisbane Broncos looked up for the fight and the huge line was in doubt… until Ryan Papenhuyzen exploded to score more points in 11 minutes than the Bulldogs have in 195 days. FOUR TRIES IN 11 MINUTES… you could scream it 100 times and you’d still not believe it. What was a competitive game was suddenly a blowout.

We liked Papenhuyzen to get over at some point for the Melbourne Storm, while Xavier Coates is quickly becoming a player you can set your watch to. Sadly for the Broncos, they ran out of puff and we missed out on our same-game multi, but you can see the gradual improvement in Brisbane.

How long until the North Queensland Cowboys hit rock bottom? Their form in the first month has been hot garbage, and there is a feeling it will get worse before it gets better. Their body language, specifically that of Josh McGuire, tells you they are an extremely unhappy mob in Townsville and they’re already planning Mad Monday.

The Cronulla Sharks were without several key players, yet they were never in danger of being beaten. They did what they wanted, when they wanted, and we were celebrating our 13+ margin prediction by the 35th minute. Valentine Holmes also helped us out at the death, scoring a late consolation try against his old side.

The first brush with COVID-19 for 2021 saw the Gold Coast Titans get the raw end of the pineapple, losing a home game to a top-four side and being beaten comfortably as a result. They still have a way to go before being considered contenders, but for a long stretch in this game they took it to one of the heavyweights in the competition. They will face the Knights next week and should be seeing it as a gift two points because of Newcastle’s injury crisis.

This was one game where we didn’t get a lot of joy, but we are ready to load up on the Titans for round five. Don’t say we didn’t tell you so.

It might have been the most brutal game of the season, and despite losing Kurt Mann, Tex Hoy and Mitch Pearce to injury, the Newcastle Knights punched well above their weight to keep it at the smallest margin of the weekend. Anthony Griffin was a surprise hire at head coach for the Saints, but at the very least he is putting some fire back in the Dragons. Their effort level is up tenfold compared to the final two years under Paul McGregor, and it makes them a tricky team to tip against in the coming month.

The +7.5 line we liked for the St George Illawarra Dragons was a winner, but our Ravalawa-Lomax-Dufty treble of tryscorers went belly up, as well as our tip for Newcastle to get the better of them.

Now this was one that certainly went the opposite to what we thought it would. Amid rumours of their captain retiring, a shocking injury toll, an 18-year-old halfback on debut, and another debutant who seemingly came from nowhere, the Sydney Roosters just did what they always do. A 13+ result against the Warriors doesn’t look like any fantastic win, but the context is key for this one, and Sydney fans should be super impressed by the performance. It showed that the Chooks should be tipped against anyone outside of the Eels, Raiders, Storm and Rabbitohs.

The NZ Warriors… well, as soon as you believe in them, they disappoint, and we proved our own pre-season theory right. The Kiwis are a nightmare to tip, and we got absolute duck eggs all around from this one.

Much like the Rabbitohs vs Roosters game in round three, the margin in this one swung dramatically with tries that had no bearing on the final result. This time it favoured those with the 13+ margin, meaning we were left seething at full-time with our Parramatta Eels 1-12 at a cool $3 in tatters.

Parra at times look like the most entertaining team in the competition and then have spells like they did in the second half, where they went quiet and let the Wests Tigers right back into the game. They were in cruise control before letting it get back to a two-point margin with eight minutes to go. Against the top teams, they won’t get away with that inconsistency.