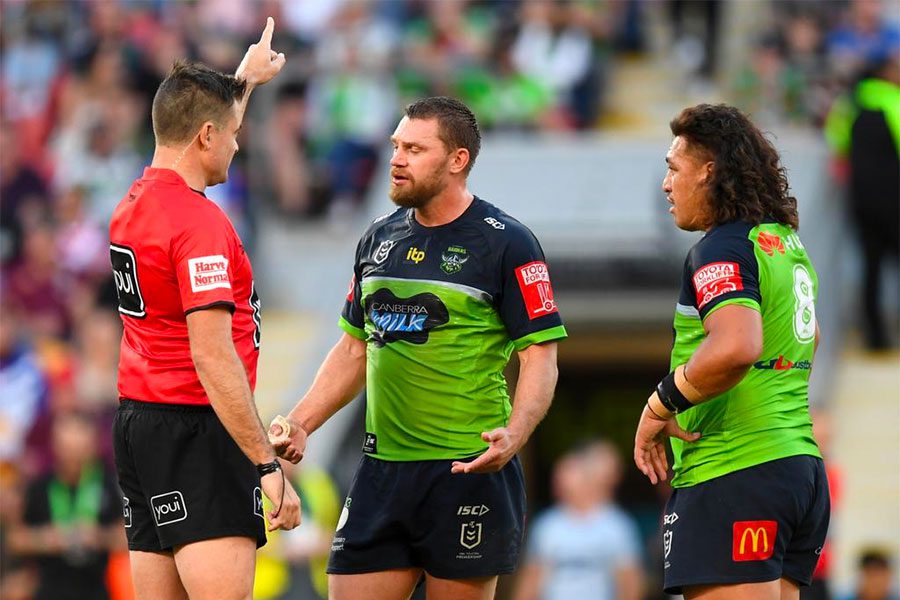 It wouldn’t be the NRL if it wasn’t a weekend surrounded in controversy.

Much of the disillusioned feeling among the public was created by the ARLC, who delivered an edict just five hours before Magic Round got underway in Brisbane that warned of harsher penalties for any forceful contact to the head or neck.

With no time to alter tackling techniques and a game which has never been played at a faster pace, chaos ensued, and it resulted in 14 sin bins and a 25-year record being broken with three different players sent off in three different games.

A few teams left a lot to be desired on the Suncorp Stadium stage, while plenty of others thrilled more than 130,000 fans who attended across three brilliant days.

Let’s take a look back on an action-packed Round 10.

Newcastle’s horror form in Queensland over recent seasons travelled with them in Magic Round as they fells 36-18 to an unusually ruthless Wests Tigers side. The Knights were without Kalyn Ponga for this game and showed no fight, leaving their season in tatters. Adam Doueihi was controversially moved to the centres for this game, but it mattered little as the former Rabbitoh dominated with 20 points of his own on the night. Unfortunately, our predictions were made before Ponga’s withdrawal, but the game itself reminded punters why the Knights cannot be trusted.

The crackdown on head contact in this game reached farcical levels and created a lopsided contest for what was meant to be one of the marquee games of Magic Round. The Manly Sea Eagles had complete control of the game from start to finish thanks to another masterful display from Tom Trbojevic, and four tries in 15 minutes after half-time took the game from a 20-6 scoreline to 44-6 in quick time. Taniela Paseka and Martin Taupau also deserve praise, with both props running for more than 200 metres on the night. The -9.5 start was easy money from the get-go, as predicted, but Xavier Coates missed out in the tryscorer stakes and cost us a $7.50 return.

Both clubs have been in all sorts over the last month, and for 55 minutes in this game, they played like they were trying not to lose. Surprisingly, a 12-8 lead to the Bulldogs with 20 minutes remaining was soon boosted by a Jack Wighton sin bin and Josh Papalii send-off. It all looked lost for the Canberra Raiders with Canterbury attacking their line, but they stood tall and scored two tries with just 12 on the field as they ended their five-game losing streak. Of all the heartbreaking losses Canterbury have had since 2018, this might just take the cake. This game was a punter’s nightmare, but we did get our predicted win by taking Canterbury at the line and the Raiders at the 1-12 margin.

Cronulla’s season goes from bad to worse. If conceding 40 points in consecutive weeks wasn’t bad enough, giving up 32 more against a South Sydney Rabbitohs side who weren’t anywhere near their best did nothing to improve the optimism of their fans. The Rabbitohs’ attacking mojo didn’t take long to click back into gear following a 50-point thrashing the week before, but for many fans it wasn’t enough to make them believers in their premiership credentials once again. A late try broke the back of many punters, including us, as the scoreline pushed from the 13+ margin back to 1-12. Briton Nikora crossing for a try in the 58th minute got our $4 prediction up, and Cody Walker with a double gave us a $2 return for a try at any time. Had Alex Johnston scored the first try instead of the second, it would have been the third time this season that our same-game multi for Souths saluted.

In a game that was full of momentum swings, the Sydney Roosters showed too much class when it mattered against an emerging Cowboys side. The Chooks looked like racking up a score at 18-0, but Sitili Tupouinua’s sin binning opened up a chance and the Cowboys came roaring back to within two points at one stage. The Tricolours continue to impress despite missing key players, while the Cowboys lost no admirers as they fought to the death. Our +11.5 prediction for the Cowboys went right to the wire, with a late try to Daniel Tupou pushing the final score to 30-16.

A horror start for the Warriors meant they were down 24-0 in just 18 minutes. While they did well to stop the bleeding and make the score line respectable, they can’t continue to give teams big starts if they want to push for a spot in the top eight. Parramatta Eels coach Brad Arthur was able to play the role of dad for a brief moment in the second half, with his son Jakob scoring on debut in the 75th minute to add a nice touch to this game. The -7.5 line for the Eels was far too short, as predicted, and the $2.40 price for the Parramatta 13+ win was a nice little win. Ben Murdoch-Masila’s 54th-minute try as a $5.50 chance had us jumping for joy too.

A 14-10 score line at the break, which included a Tyrell Fuimaono send off and Josh McGuire sin binning, was a huge tip of the hat to St George Illawarra. They ran out of steam in the second half, with the Melbourne Storm running riot and scoring six tries to push the margin out to 26 points. Josh Addo-Carr’s hat-trick made it 12 tries in his last three games, and he saluted as a $7 favourite in the first tryscorer market. The -14.5 line was another easy win at $1.90, but our best tip of the weekend came good when Mikaele Ravalawa scored a first-half double to get the $9.50 return. Following that, watching the Storm score some spectacular tries in the second half was all the more sweet.

No one really gave the Titans much of a hope in this game, but the Penrith Panthers were incredible in the first 40 minutes and put the result beyond doubt within the opening 20. James Fisher-Harris made his mark when he steamrolled Tino Fa’asuamaleaui for the Panthers’ third try, but with three tries and five assists of his own, Nathan Cleary showed why many believe he is the best player in the NRL. The Titans showed some spirit after being reduced to 12 men for the entire second half, scoring some late tries to make it 46-12. The -20.5 without David Fifita was another long line we were able to make a profit on, while Liam Martin crossing in the 52nd minute highlighted the vulnerable left edge of the Titans.