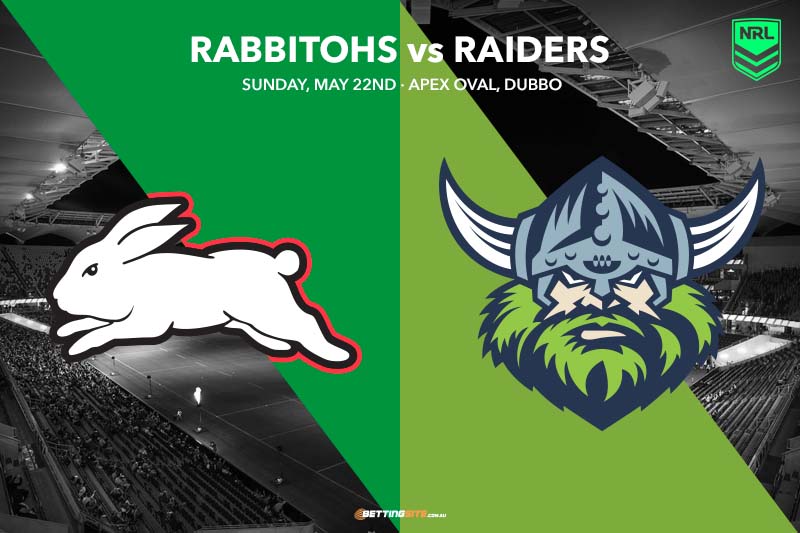 NRL returns to Dubbo when the South Sydney Rabbitohs host the Canberra Raiders on Sunday afternoon.

Canberra produced their best performance of the season in Magic Round, while the Rabbitohs almost coughed up an unassailable lead against the Warriors.

Canberra Raiders come in as the $2.55 outsiders despite impressing against Cronulla.

That game was set up for them to fade and they had plenty of excuses when they had three separate sin-bins and played a period of the second half with just 11 players.

That price indicates the online bookmakers are thinking that win is something of an exception rather than the rule, and that Souths have too much class if they are switched on.

Importantly for the Green Machine, Jack Wighton will return from suspension and if he comes back in the form he was in before his two-week ban, taking them as an outsider all-of-a-sudden has plenty of appeal. The South Sydney Rabbitohs weakness on their right-edge brings Wighton in as an any time tryscorer at $4.25, while Jordan Rapana at $2.50 is another good option to take.

The 1-12 option at $3.50 for a Raiders win is a nice ‘upset of the round’ pick and if it comes through it will mean Canberra have quietly strung together three-straight wins.

They have eight games at the back end of their schedule which would be considered as winnable games, so perhaps those who backed them to make the top eight should hang on to their betting slips?

Just what were Souths doing in the final 20 minutes of their game against the Warriors?

In the first half it looked as though there was 50 points on the table if they wanted it, yet they almost lost the game?

There is something fundamentally missing with this South Sydney team. They still have enough individual talent in some parts of the field but the ruthless nature they had adopted in previous seasons has disappeared.

The 2021 version would never have gone through the motions like that to finish the game, which makes them dangerous to back as a favourite.

They’re still without Cameron Murray in the forwards and their right-edge combination of Jaxson Paulo and Taane Milne leaves a lot to be desired.

Milne might have scored a double last week, but you’d be more inclined to bet he will concede a double in this game.

Paulo as well hasn’t shown enough to be considered a good option at centre in the NRL, so there is an obvious week spot if Canberra want to exploit.

Alex Johnston at $1.83 is the favourite option in the anytime try scoring market with Palmerbet and that’s still a good price for a player considered a certainty most weeks. His strike rate is no fluke after nine seasons in the top grade.

Jack Wighton’s return and Cody Walker’s blistering first half last week is going to give both fan bases plenty to think about. This battle is a simple one. Whoever plays the best will win their team the game.

Canberra will get the upset in this one at the 1-12 margin. If you’re not as confident, just take them at the +5.5 handicap. If Souths managed to get across the line, they won’t do so with any great conviction and it will be close all the way.