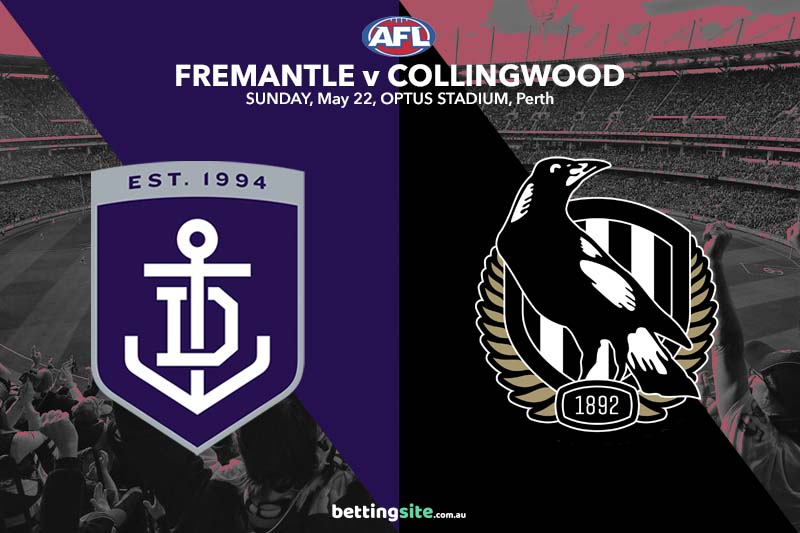 Can the Fremantle Dockers bounce back from a disappointing loss when they host the Collingwood Magpies at Optus Stadium in AFL round 10 action on Sunday?

With both teams coming off confidence damaging losses, this game will give us a good indicator of their mental resilience and prospects for the 2022 AFL season.

Fremantle was comprehensively outplayed by the Suns in round 9 in tough conditions on the road. Their attacking prowess disappeared in the mud, and they booted an ugly 4.9 (33). But the Dockers will take solace in their home form, which has been impressive all season, and we expect them life against the Magpies.

The Dockers won six games on the trot prior to the Suns’ loss. Most of these wins came at good odds, and we have been riding them hard throughout 2022. These results have been built on solid defence, but their improved scoring ability has been a surprise.

Collingwood started out the season looking very hungry and much improved. Since then, it feels like they have bottomed out somewhat. They have been hit with injuries to key players like Brodie Grundy, but we can draw an accurate line of their form from a laboured win over the lowly Bombers in round six. Essendon have since proven competition easy-beats, and in hindsight the Pies may have been overrated.

Collingwood was soundly beaten by the Dogs in round nine and should have shown much more against another side outside the top 8. Given the Magpies recent slide, we would be very surprised if the Pies could steal a victory here.

Freo midfielder Will Brodie is having a standout year. The 23-year-old shows maturity well beyond his years, and is averaging 27 disposals, 4.7 tackles, and 6 clearances this season. Still lightly framed, Brodie’s skill and poise allows such numbers, rather than brute strength. Collingwood midfielder Jack Crisp is five years Brodie’s senior and packs an extra four kilos of muscle. Crisp is averaging 26 disposals, 5.6 tackles, and 4.4 clearances this year, so very similar numbers. For lovers of midfield battles, this match-up looks to be the highlight of this game of footy. There is some concern, Crisp may not play on Sunday, after coming down with illness that has swept through the Magpies in recent weeks.

Fremantle is short-priced with Australian betting sites here as you might expect. The Dockers v Magpies betting line has also been set at a wide 24.5 points, which is going to be temping for many. The total points line has been set at 144.5.

Betting markets are anticipating a scrappy, low scoring affair, especially at the Magpie end of the field. The weather forecasters, who are never wrong, inform us that there’s an 82% chance of rain at game time, so that will blunt free-flowing ball movement and scoring chances. It’s a tricky betting game, the market looks about right and we are happy to back Freo 1-39 here. This is returning an attractive $1.98 on Ladbrokes betting. On closer inspection, this looks like a great bet.

For the value-junkies, we’ll focus on the possession markets instead of goal scorers given the expected low totals. We will take Freo 1-39, into Andrew Brayshaw 25+ disposals, into Will Brodie 25+ disposals. This combo will return $3.79 courtesy of Neds Australia and should be the icing on the cake of our main tip.