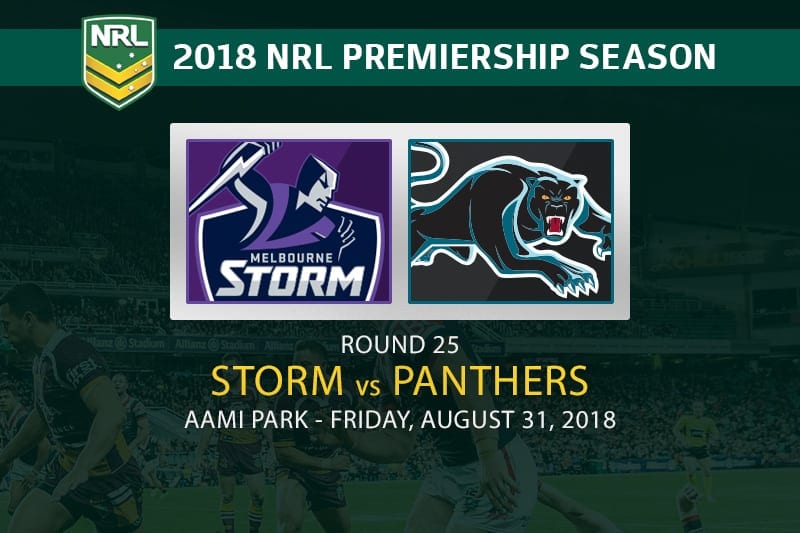 Ostensibly a match up between the league leaders and the fifth placed side on the eve of the finals looks like a blockbuster showdown, but in reality the game promises to be a walkover.

The Melbourne Storm will clinch the minor premiership if they can overcome the Panthers on Friday night, but even if they don’t there’s a good chance the boys from down south will remain in top spot.

The Storm are two points clear of the second placed Roosters and possess a superior points differential, which means the reigning premiers would have to lose in cataclysmic circumstances to relinquish top spot on the ladder.

Penirth might be heading towards the finals with a top-four berth still up for grabs but they already look like the also-rans of 2018.

The Panthers got wiped off the park by the New Zealand Warriors last week across the Tasman as off-field drama begins to overshadow what loomed as a promising campaign.

Can the Panthers win their way into the top-four or will the Melbourne Storm lock away the minor premiership before the weekend begins?

Munster has stepped up admirably since Cooper Cronk departed for the Roosters, but the real test is about to begin. With Billy Slater and Cam Smith about to depart the club, Munster is primed to be the face of the franchise. If he hits form on Friday and carries that into the finals, back-to-back premierships beckon.

Maloney has missed the last few weeks through a knee injury, but his return this week comes at the ideal time for his side. Keep an eye on Maloney has he attempts to build fitness heading towards the finals. If he can hit the ground running the Panthers are a huge chance of an upset.

Storm vs Panthers – Who wins?

All the signs point towards a strong Storm win heading into Friday night.

While their record in recent times against fellow top-eight sides isn’t ideal, the Storm thrive at home and they will be looking to sew up the minor premiership and position themselves nicely for a crack at back-to-back premierships.

The Panthers at their very best are a formidable side but off-field dramas are making it hard for the players to perform to their potential on the field.

We’re backing the Storm to end their season in style.