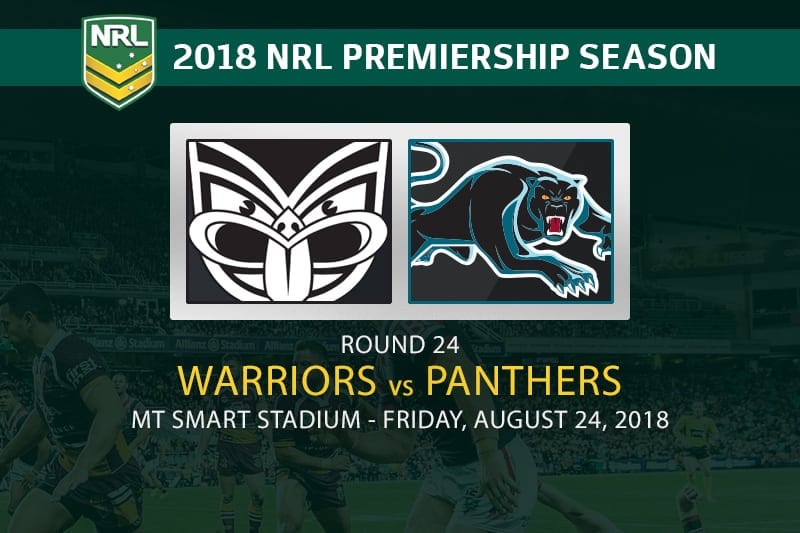 It is all on the line for the two teams which kick off Friday night’s NRL double header as the Warriors host the Panthers in a finals-defining clash.

The Penrith Panthers will play finals football in 2018, but the fifth placed side would want to get their act together if they are to have any September success.

The Panthers were shocked by the Knights last week when a top-four position was on the line. While Penrith is still locked on 30 points alongside the fourth placed St George Dragons, the final two weeks of the season will be tough to overcome.

The Panthers face the Melbourne Storm in the final round of the season.

The New Zealand Warriors are lucky the Tigers failed to overcome the Dragons last week or they could be staring down the barrel of a finals-less 2018.

Their position is far from assured, but a win against Penrith or Canberra in the final round of the season will ensure they are playing footy in September.

There’s a pathway for both sides to finish inside the top-four, so it’s all to play for on Friday.

The Kiwi representative was well below his best last week in the shock defeat to the Bulldogs. Can SJ bounce back sharply for the Warriors? All eyes will be on Johnson, who will be relied upon heavily to produce some of his customary magic.

James Maloney misses again for the Panthers so it’s time for Nathan Cleary to step up and take control of his side. The NSW representative is one of the best halves in the game, but he failed to have an impact last week against the Knights. Time to step up Nathan.

Warriors vs Panthers – Who wins?

We’re expecting a fired up Warriors outfit on their home deck come Friday.

Both teams suffered embarrassing losses last week, but most damning for Panthers is their recent record against top-eight teams. Penrith has gone down by combined 42 points in their last two games against fellow finals competitors.

The Warriors return back home where they have been terrific this season. The Kiwis have won seven of ten match ups across the Tasman, including victories over top-four teams the Sydney Roosters and the St George Dragons.

New Zealand will be stung into action following last week’s loss to the Bulldogs and we’re expecting a strong response for a team desperate to lock in a top-eight finish.