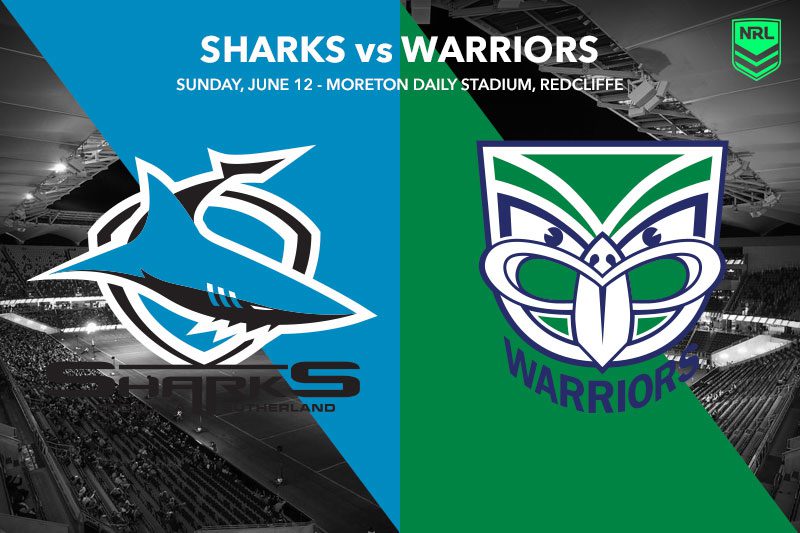 A super afternoon of Sunday football will end in the Cronulla Sharks taking on the New Zealand Warriors from the picturesque Moreton Daily Stadium in Redcliffe.

The Sharks have named an almost full-strength side with Jesse Ramien returning from suspension, while Wade Graham could be a late inclusion having been named on the extended bench.

The Warriors sacked coach Nathan Brown during the week, and the appointment of Warriors and New Zealand legend Stacey Jones will need to be an enormous catalyst if this side is to get up for a win. Josh Curran returns to the side from injury and a late change could be made if Ronald Volkman is to be given his NRL debut over a struggling Shaun Johnson in the halves.

The Warriors have only won on 16 of 41 occasions against the Sharks and will need a lot to go in their favour if the Warriors are to add to their win total. The Sharks were tipped at the start of the season by many to challenge for a premiership with Nicho Hynes at the helm, but have only managed wins over the Titans and Warriors in their last five games. Look for a season clean sweep to come the way of the Sharks this weekend, as the two weeks off with the bye round will bring fit and fresh Sharks side to take a 13+ win over the Warriors at $1.80 with Australian online bookmakers.

The left-edge attack of Siosifa Talakai, Teig Wilton and Ronald Mulitalo has been on fire for a majority of the 2022 NRL season and should be given the opportunity to return to top gear Sunday. Whether it be cross field kicks to Mulitalo, or set-plays creating space for either player, the Warriors defence will have their hands full stopping these two outside backs. Look for both players to score a try at anytime during the match paying $1.68 and $2.25 respectively.

The Warriors have struggled at the best of times to score points this season, and coming up against a side like the Sharks, scoring will not become any easier. Coach Craig Fitzgibbon will drill a defensive mindsight into his Sharks players, pushing them to continue their form as one of the best defensive sides in the competition. With this in mind, value can be found in scoring markets as the Sharks should be the only side able to score 10+ points paying $3.

The roles of these two fullbacks differ largely based on the roles they play in their respective sides. The Warriors have lacked any ability to create try-scoring opportunities that do not flow directly through Reece Walsh, who is always their most dangerous player on the field. Meanwhile, for the Sharks, it’s the work of William Kennedy’s halves that puts him in positions to either score or create opportunities for the outside backs around him. The impacts these two players will have on their sides will be seen differently, and if Walsh is unable to create attack for the Warriors, they’ll be unable to match it with Kennedy and the Sharks.