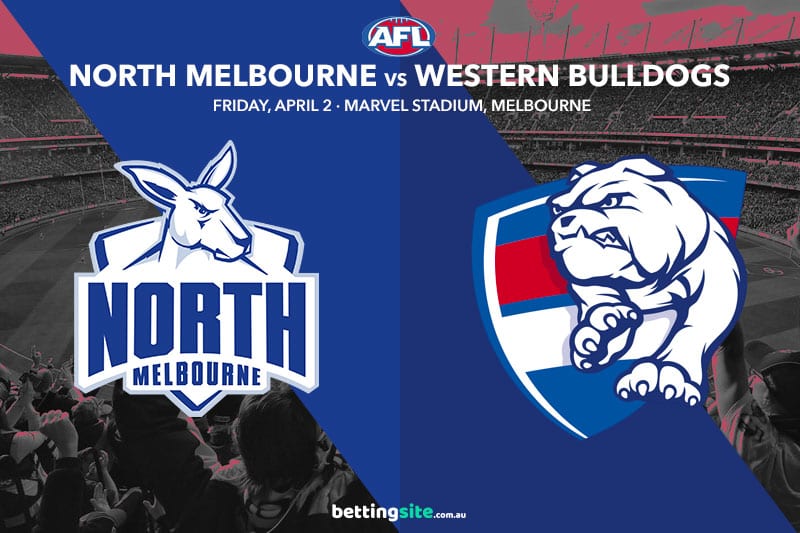 The annual Good Friday matchup sees the lowly North Melbourne take on the rampaging Western Bulldogs in a highly contrasting contest at Marvel Stadium in round three of the 2021 AFL season.

North Melbourne have not given their fans much hope that 2021 will be one filled with wins, copping back-to-back defeats of more than 50 points to Port Adelaide in Round 1 and then Gold Coast in Round 2. The Kangaroos will be boosted by the return of Ben Cunnington on Friday afternoon, but they will need to be at their absolute best and then some to be competitive with the Western Bulldogs. It is no surprise that North Melbourne are rank outsiders at online bookmakers, with odds of $8.50 available for what would be one of the upsets of the year.

The Western Bulldogs have been dynamic in both of their wins to start 2021. They held a comfortable lead throughout their Round 1 match with Collingwood and then went toe-to-toe with the Eagles last week to prevail by seven points in a genuine heavyweight contest. The 2016 premiers will be boosted by the return of Easton Wood, while Jason Johannisen could make a return off the half-back line.

Two recent top-10 draft picks are set to battle it out in the middle of Marvel Stadium on Friday afternoon. Luke Davies-Uniacke has quickly become an integral part of North Melbourne’s midfield, while Bailey Smith has barged his way into what was already one of the most talented on-ball brigades in the country. Davies-Uniacke has been a rare shining light for North so far this year, averaging close to the three clearances and 10 contested possessions per game. Smith has gone to another level yet again; he racked up 36 touches and kicked two goals against the Pies and then backed it up with 25 touches and a goal against the Eagles. Sportsbet is offering $3.40 for Davies-Uniacke to gather 25 or more touches, while odds of $2 are available for Smith to cross the 30-disposal mark.

Where do you start with North Melbourne? They have not shown much to suggest they will be competitive against the Dogs on Friday afternoon, but this is their showpiece fixture of the year, and the Roos will be wanting to put in a big performance on Good Friday. Tarryn Thomas has shown in the opening fortnight that he could be a tonic for North Melbourne’s scoring woes, kicking 2.0 against the Power and then 1.3 against the Suns. Top AFL betting sites are paying $5.50 for him to kick two or more goals, it looks a good option despite the potential lack of service into North’s forward 50.

The Dogs were brilliant last week against the Eagles, and now they come up against a vulnerable North Melbourne just five days later. They play Marvel Stadium as well as anyone, and it looks like they will be a force to be reckoned with this year. The line is set at -42.5, but even that looks to be a couple of goals short of where it should be. Considering the Bulldogs beat the Roos by 39 points in shortened quarters last year, this could be a serious thumping.

Western Bulldogs to win by 60+ points

Led by the likes of Marcus Bontempelli, Jackson Macrae, Josh Dunkley and Adam Treloar, the Western Bulldogs have a midfield that stacks up against the best in the competition. The Dogs will be looking at this fixture as a chance to build on their percentage, and having put 100 points on the highly rated West Coast Eagles, one can only imagine the score they could put past this North Melbourne team. A 10-goal margin seems appropriate considering how the new man-on-the-mark rule has made the already speedy Dogs even faster in transition.

Josh Bruce has frustrated Bulldogs fans since arriving at Whitten Oval 18 months ago, but his start to 2021 has shown plenty of promise. He bagged three goals against a handy West Coast defence and has averaged almost three goals a game when he comes up against North Melbourne. The last time these two met Bruce slotted six goals in a best-on-ground performance, and he could do something similar on Friday against a Roos backline that lacks class and experience.

We expect the Western Bulldogs to be far too good for North Melbourne, led by dominant performances from the likes of Josh Bruce and Bailey Smith. The lone shining light for North looks to be Tarryn Thomas, who we expect to hit the scoreboard with a couple of goals.