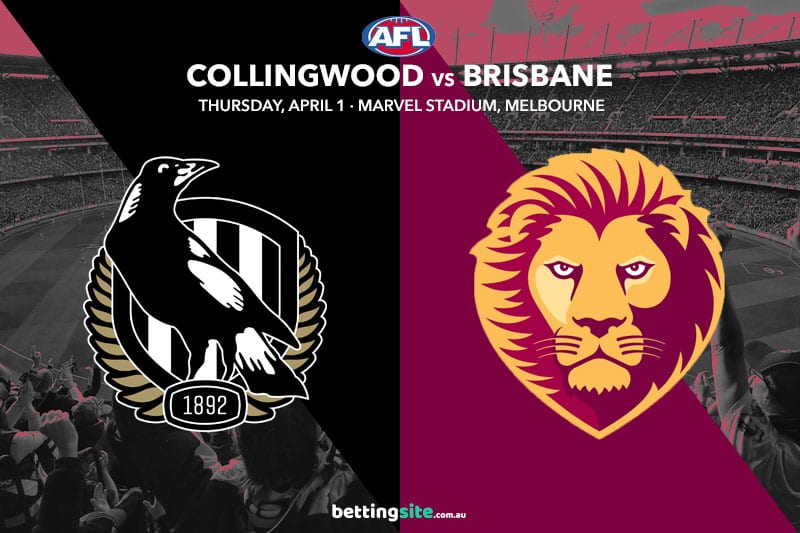 Round three of the 2021 AFL Premiership season starts off with a huge contest as Collingwood and the Brisbane Lions duke it out at Marvel Stadium on Thursday night.

Formerly scheduled to take place at the Gabba, this match was moved to Melbourne following the snap lockdown in Queensland that has forced the Lions to remain in Victoria following their gut-wrenching loss in Geelong last week.

Chris Fagan’s men were unlucky in round two, but the pressure is now on the winless Lions as they look to get their campaign back on track.

A strong performance against Carlton last weekend showcased exactly what Nathan Buckley wants from his Magpies this season, but Jamie Elliott’s fibula fracture will leave a big hole in the forward half for at least three months.

After back-to-back blinders from Darcy Moore, some in the AFL media have dubbed him the best defender in the competition. Joe Daniher is clearly a special player, but his start in Brisbane has not been spectacular. The battle between these two sons of guns on Thursday night will be worth the price of admission alone.

The Magpies have won six of their last seven games against Brisbane, but they did lose to them last season in a low-scoring affair without a pair of their stars. Steele Sidebottom loves racking up disposals against the Lions, while Jordan De Goey averages four goals per game in his last three matches against them. Besides last season’s poor performance, the Pies have clearly had the edge over the Lions since 2014.

Lachie Neale has endured a tough start to his 2021 campaign, as he has struggled to find the footy and make an impact. The 2020 Brownlow Medal winner has a poor track record against the Pies, while his primary feeder in the ruck, Oscar McInerney, could miss this match after being subbed out of last week’s contest.

Jordan De Goey is Collingwood’s most damaging player in recent history against Brisbane, but Brody Mihocek is a very close second. Mihocek has started his season with five goals from the first two games, kicking three against Carlton last week. With all the focus on De Goey, Collingwood’s leading goalkicker of the past two years should go under the radar and get the job done.

Collingwood to win by 1-39 points

An agitated Brisbane Lions roster was forced to stay in Melbourne following the recent COVID-19 outbreak. They have slept in a hotel for the past week while remaining isolated from the public. Meanwhile, it has been business as usual for the Magpies, who should take this opportunity and run with it.

The Magpies have scored over 100 total points in four of the last five contests against Brisbane, including their 2018 clash at Marvel Stadium. Hugh McCluggage should step up this week for the Lions after a pair of subpar performances to start the season, but we still expect Collingwood to run away with a solid victory.