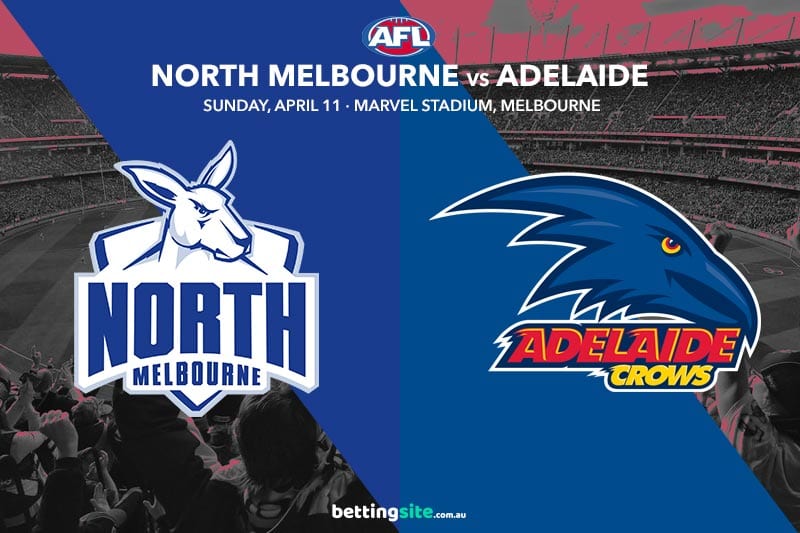 Will Taylor Walker kick another bag when the Adelaide Crows face North Melbourne at Marvel Stadium this Sunday in round four of the 2021 AFL Premiership?

David Noble’s Kangaroos conceded 25 goals as they went down to the Western Bulldogs by 128 points on Good Friday – their worst-ever loss to the Doggies.

The Crows eclipsed the Suns to notch their second win of the season and climb into the top eight, and they will view this match as an opportunity to boost a percentage that still sits below 100.

The Roos are one of only two teams in the AFL without a win after the first three rounds, and it would take a remarkable form turnaround to lift them off the bottom of the ladder this weekend.

Ben McKay would be having nightmares heading into this clash, as Taylor Walker has kicked 17 goals from his first three matches this season. McKay conceded 10 goals to Josh Bruce last week and simply couldn’t cope with the quick ball movement inside 50 from the Bulldogs midfield. Walker will have his eyes on another bag against his inexperienced opponent this Sunday.

Luke McDonald will return for the Roos this week after fully recovering from his quad injury. The 2020 North Melbourne best and fairest was a huge ball-winner late last season, and we expect that form to carry over into 2021. Expect a good game from McDonald and his captain, Jack Ziebell, who had 33 touches last week. The Roos are struggling to score this season, and you can find them at $5 with Sportsbet to put up fewer than 60 points this week.

Taylor Walker is tearing apart every team he comes up against, but there is more to the Crows than just their superstar forward. The Crows have covered the line in six of their last eight matches, while the Roos are progressively losing by larger margins each week. Paul Seedsman and Ben Keays are going under the radar this season, but they provide great value in the disposal markets at leading AFL bookmakers.

Shaun Atley to get 25+ disposals

The Roos will need Shaun Atley’s run and carry to get through Adelaide’s tough midfield. The experienced flanker should find plenty of the footy off half-back, as he has done in his last three meetings with the Crows. Atley is averaging better than 21 touches a game this season, and we like him to crack 25 disposals this weekend.

Adelaide Crows to win by 25+ points

Even though this will be the Crows’ first match in Victoria this season, we believe they will come away with a big victory. North Melbourne could put up a fourth consecutive loss of more than 50 points, but we are playing it safe and backing Adelaide to win by 25 or more.

All three of Adelaide’s matches this year have exceeded the 180-point mark, which gives us great confidence in the overs saluting in ideal conditions at Marvel Stadium. Luke McDonald could top 30 disposals if he plays, but we are happy to stick with Shaun Atley for 25 or more.