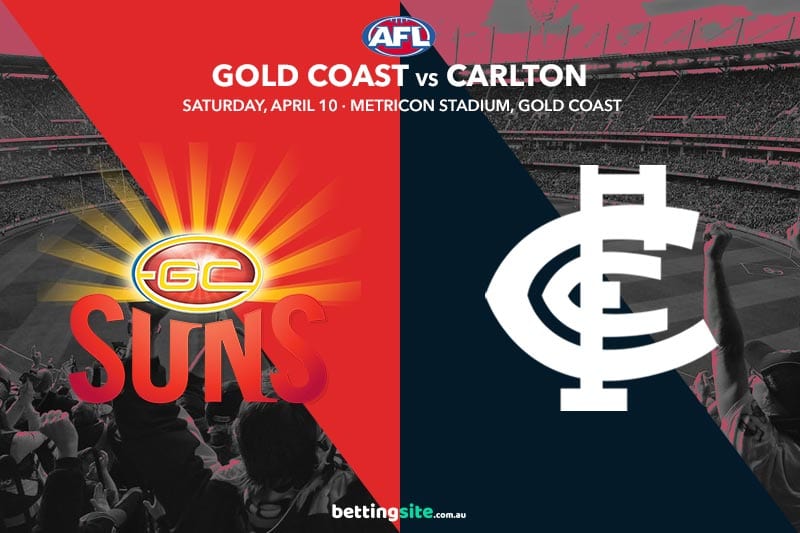 The Gold Coast Suns take on Carlton at Metricon Stadium this Saturday night in a clash that should shape both teams’ 2021 AFL Premiership campaigns.

Both the Suns and Blues are sitting 1-2 heading into round four, and they must get a move on if they want to have an impact in September.

The Suns will be without a massive piece of their team this Saturday, as Jarrod Witts suffered an ACL injury last week and both of their backup ruckmen are also injured.

Chris Burgess is the closest fit player on the Suns’ list to a ruckman, but at 191cm, he is smaller than several midfielders in the Carlton squad.

It will be interesting to see if David Teague makes any changes at the selection table following the Blues’ 45-point win over Fremantle last week.

We mentioned last week that Sam Collins could have a tough time against Taylor Walker, which proved to be the case as the Adelaide star kicked six goals. Now he comes up against Harry McKay, who had 12 shots on goal and slotted seven through the middle. Collins needs to bounce back this week, but McKay has been damaging in his last couple of games against the Suns.

With no recognised ruckman in the team, the Suns midfielders will need to shark hitouts from Marc Pittonet all night long. This style of play should complement inside bulls such as Hugh Greenwood and David Swallow, so you should consider them in your disposal betting picks this week.

The Blues have beaten the Suns in three of their last four meetings, with an average winning margin of more than 30 points. When these two teams clashed last season, Carlton kicked a ridiculous 18 behinds from their 25 scoring shots. If the Blue Baggers kick straight this week against the ruckman-less Suns, we could see the margin blow out beyond the average.

Fremantle had no answer last week for Harry McKay, who would have finished with a lot more than seven goals if he had been a bit sharper with his set shots. Sam Collins had a tough one against Tex last week and could be in for another long night.

Teams playing without an experienced ruckman have delivered mixed results so far in 2021, but we think Jarrod Witts will prove to be a huge loss for the Suns. Marc Pittonet should give the likes of Sam Walsh, Zac Williams and Patrick Cripps first use all night long as the Blues romp to a comfortable win.

A majority of the recent clashes between the Suns and Blues have gone under the total points line, but now that both teams have functioning forward-lines, we see this match going over the 169-point mark. The Blues will run away with a big victory here if they replicate what they brought in round three.