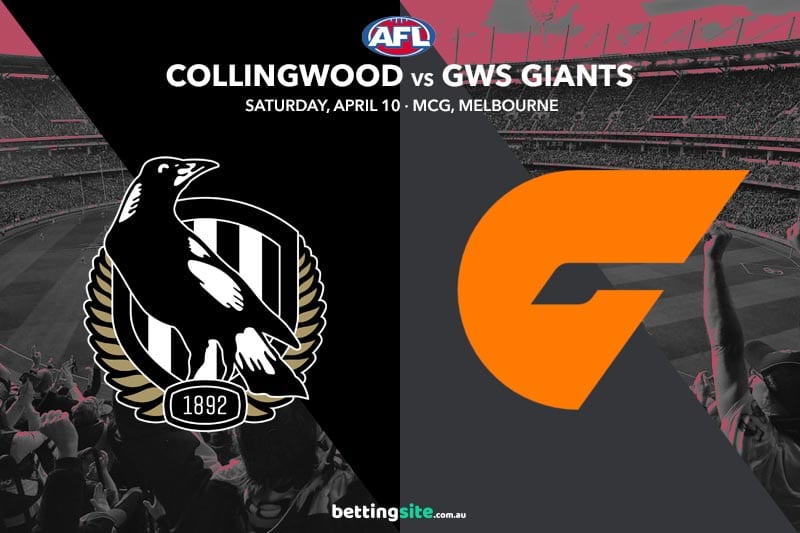 Up and down Collingwood take on the injury-ravaged GWS Giants at the MCG on Saturday night in round four of the 2021 AFL Premiership.

The last time these two teams faced off at the ‘G was in the 2019 preliminary finals, where the Giants won a pulsating contest against the Pies despite being without several key components of their team.

Collingwood will be looking to bounce back from an after-the-siren defeat to Brisbane last Thursday night. The Pies came through that game with a clean bill of health, but we expect coach Nathan Buckley to make a change or two at the selection table following a disappointing last-quarter fade out.

The Giants, on the other hand, were hit with three season-defining injuries – captain Stephen Coniglio, defender Phil Davis and tagger Matt de Boer – in their defeat to Melbourne.

GWS have become adept over the years at dealing with key figures out of their lineup, but this time it could be a bridge too far due to the lack of depth on their playing list compared to previous seasons.

There is little debate that Toby Greene is one of the most influential players in the AFL, but his kryptonite in recent years has been Collingwood’s Brayden Maynard. If you go back to the 2018 semi-final, Maynard restricted Greene to no impact on the scoreboard and only nine touches to help the Pies progress.

When the Giants have got the better of Collingwood, Greene has been front and centre in their efforts. With the likes of Davis, Coniglio, Whitfield and de Boer missing for the Giants, they will need another big effort from Greene on the back of a five-goal haul against Melbourne. However, Maynard is up there as one of the best lockdown defenders in the competition, and Toby will need to be at his best to break the shackles.

Why Collingwood can win

Despite the Giants being riddled with injuries, Collingwood tend to struggle to put a team to the sword when given the opportunity. Odds of $3.40 are on offer for the Pies to get the job done by 1-24 points on Saturday night, and that could be one of the better plays of the week due to the team’s lack of consistent forwards.

Why GWS can win

This will be a backs-against-the-wall type of game for the Giants. They look to be outclassed in the middle of the ground, and Collingwood’s back six are close to the best in the competition. What the Pies do struggle with, though, is forward pressure, so we expect veteran Callan Ward to use his smarts off the half-back line to rack up disposals at will. We are taking the $2.88 on offer at Sportsbet for the former GWS skipper to rack up 25 or more disposals at the MCG this weekend.

Our top tips for the Magpies vs Giants clash are:

Livewire forward Bobby Hill has shown glimpses of what he is capable of, but he is yet to put in a full four-quarter effort. If the Giants are to have any chance on Saturday night, Hill will need to give the likes of Toby Greene, Harry Himmelberg and potentially Jake Riccardi a chop out. We are backing him to hit the scoreboard a couple of times as he returns to the MCG.

Taylor Adams to get 30+ disposals

The former Giant Taylor Adams is now one of the most consistent midfielders in the competition. Having crossed 30 disposals against the Giants on two occasions, we expect Adams to be influential on Saturday night as the Pies look to recover from an up and down start to the season. Coming off 25 touches last week, and no known tagger now that Matt de Boer is out, expect Adams to rack up disposals as he pleases.

The Magpies are not offering much value in head-to-head betting, but we have found some value in the same game multis. We’re confident in the Pies’ ability to win, while we think Callan Ward can gather plenty of the ball off the half-back line. Magpies ball-winner Taylor Adams and GWS goal-sneak Ian Hill round out our same-game multi tips for the Collingwood vs GWS clash.