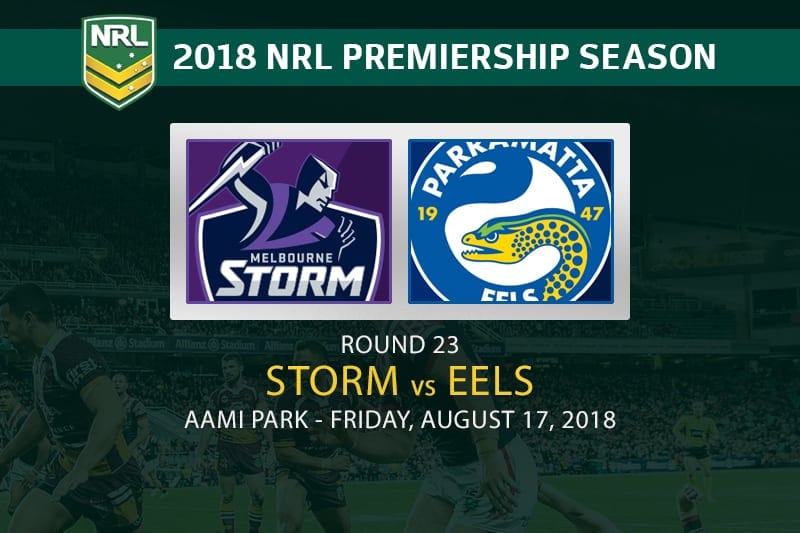 Only one of the team’s clashing in this contest will play a role in September this season, but the Melbourne Storm would want to get their act together if they are to defend last year’s premiership.

For the first time in recent memory the Storm have lost back-to-back games in August. Last week’s loss to the Sharks was particularly stinging for the home side as they could have leveled up on points alongside the second placed South Sydney.

Ostensibly the Friday night clash against the Parramatta Eels looms as a winnable match, but the ladder positions belie just how good the 15th placed Parra have been.

The Eels are fresh off a stunning 40-4 win against St George, which was the third win from their last four contests. The Storm would be silly to think this game will be a walkover heading into Friday night.

Every game from here on in will be a must-watch for the soon-to-be retired Billy Slater.

The man they call Billy the kid threatened to snatch the game away from the Sharks last week but his teammates just couldn’t match his intensity towards the end of the match. Look for Slater to have a big impact in what looms as an important game in the Storm’s premiership defence.

After a disappointing opening half to the season the Hayne Plane has launched into flight, culminating in a opening half hat-trick at the St George Dragons last week. Hayne is arguably playing for his career as the season comes to a close and a follow up performance to his man of the match display wouldn’t hurt his chances in the slightest.

Storm vs Eels – Who wins?

If the Storm are to be major plays come finals time this is a game that simply cannot afford to drop.

While the Eels have been in great form recently, they are 15th on the ladder for a reason. We would have said last week that back-to-back losses for the Storm won’t happen, but a third-straight defeat almost certainly will not.

Craig Bellamy will have his men up and firing for this one, in a match that we believe will see the Storm continue to pressure the second placed Bunnies for top-two honours.