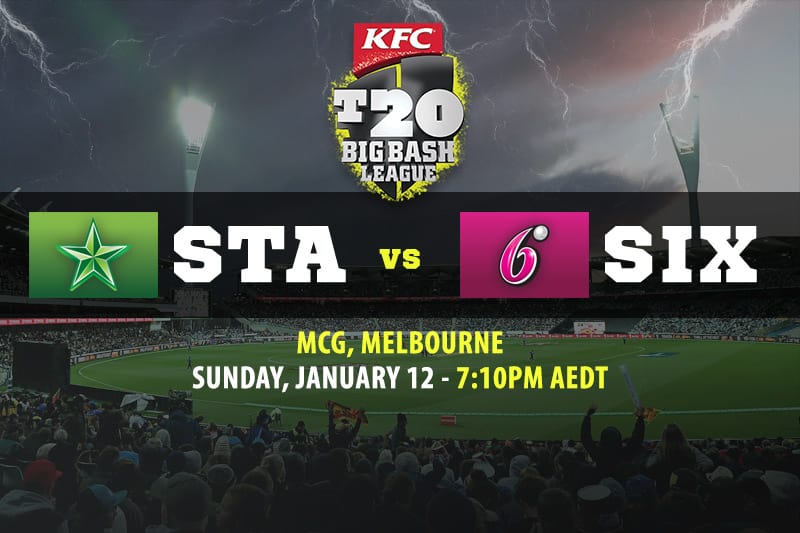 There is no bigger Big Bash League clash this week than the battle between the first-placed Melbourne Stars and second-placed Sydney Sixers at the MCG on Sunday night.

Yet to face each other this season, the Stars and Sixers will display some of the best batting and bowling talent in the division.

Marcus Stoinis leads the BBL in runs made and teammate Haris Rauf is tied-second in wickets taken alongside Sydney Sixers import Tom Curran, while Josh Philippe sits fifth in the runmaking charts.

Having only lost three matches between them, these teams are flying and look all but certain to make the finals.

This could be a preview of the BBL09 championship match, so sit back and enjoy the game with these free BBL betting tips.

Marcus Stoinis top Stars runscorer
Who else but Marcus Stoinis? The Adonis for the Melbourne Stars leads the league in runs scored this season with an average of 66 per innings. Although he has a massive average, Stoinis only has a strike rate of 120 due to his penchant for anchoring the innings. Stoinis makes bowlers bowl where they don’t want to, or cannot perfectly execute, allowing him to capitalise.

Josh Philippe top Sixers runscorer
Rounding out the top five runscorers in BBL09 is Josh Philippe, with an impressive average of 44 runs per innings. As his teammates have fallen short in the past, we think it will be a case of Philippe simply remaining at the crease the longest and scoring consistently. The young keeper-batsman is having a terrific year and will keep it going on Sunday night.

Sandeep Lamichhane 2+ wickets
Sandeep Lamichhane is a high-quality spin bowler that slows down the run rate and gets the Stars back in control of the contest, but his wicket-taking skills are not to be underestimated. With six wickets in his six matches, the Nepalese star is a player to watch out for. If the Sixers try to punish him, Lamichhane can fool them and take a couple of wickets.

Tom Curran 2+ wickets
Tom Curran has already taken 13 wickets in his eight appearances this season, with his best performance coming last match against the Strikers where he took four scalps and conceded only 22 runs. The English seamer is in great form and could be the most important player on the field across both teams this Sunday.

Melbourne Stars to win @ $1.55 with BetOnline

Although the Melbourne Stars are our tip to win this match, we can see the Sixers putting up a very good fight and making it a close thing. The superior depth and consistency of the Stars’ batting lineup gives them the edge.