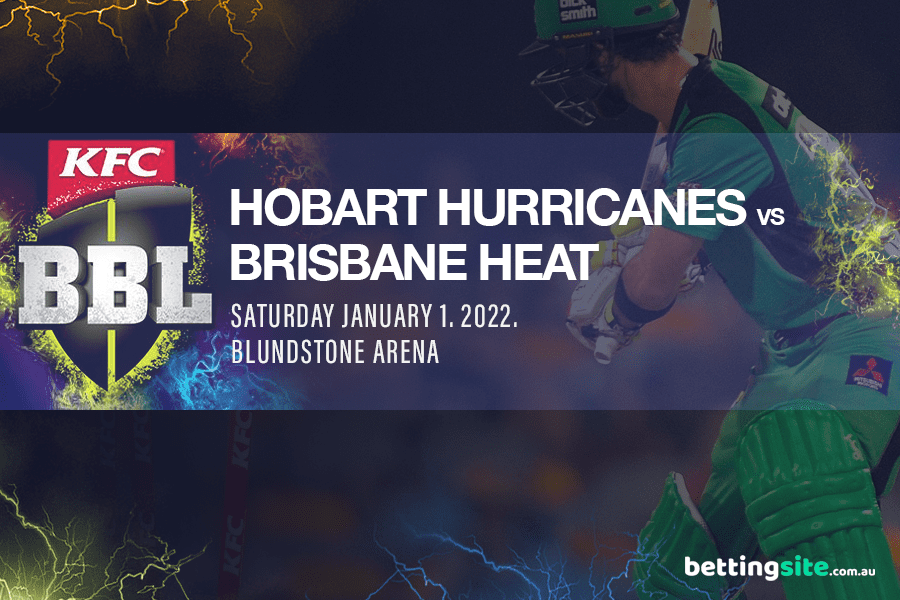 The rampant Hobart Hurricanes are set to host the underperforming Brisbane Heat on Saturday afternoon as part of New Year’s Day action in the Big Bash League.

The Hurricanes have strung together three wins in succession, with the last two wins coming on the back of consecutive centuries from Ben McDermott. With Matthew Wade (0) and D’Arcy Short (5) coming off poor games against the Melbourne Renegades on Wednesday night, the Hurricanes will be hoping they can have their dynamic trio at their damaging best on New Year’s Day.

Having set the Renegades a total of 5/206, the Canes’ bowling attack were nothing short of perfect when bowling their opponents out for 121 in the 16th over. Tom Rogers (3/24) and Sandeep Lamichhane (3/32) led the way with ball in hand and against a fragile Brisbane Heat batting lineup, the Hurricanes may just extinguish the Heat on a hot Saturday afternoon in Hobart.

Brisbane are coming off one of the more remarkable matches in Big Bash League history against the Sydney Sixers, but all in all, it ended as another disappointing loss for the Brisbane Heat. They were skittled for an astonishing 105, with X Factor sub Jack Wildermuth their top scorer when amassing 27 runs at a run a ball. When the Extras total (3) outscore the two scores of openers Chris Lynn (2) and Jimmy Pierson (0), it is always going to be an uphill battle and they will be needing to put a lot more than 105 runs on the board to be competitive against the Hurricanes.

Remarkably, the Heat bowlers had their side right in the contest when having the Sixers 8/47 in reply. However, a remarkable unbeaten ninth wicket partnership of 59 by Sean Abbott and Ben Dwarshuis kept the Heat at bay and handed the Sixers one of the greatest victories the BBL has seen. All things considered it was a near perfect bowling display from the Heat’s bowling attack, with a freak partnership stopping them pulling off the upset of a century.

It is easy to see why the Hurricanes are $1.57 favourites with online bookmakers, whilst the Heat at $2.40 may present some value if they can show a bit more when they have bat in hand.

It is the tale of two different form lines when the Hurricanes and Heat clash. The Canes look to be hitting their straps as the finals of BBL11 get closer, whilst the Heat are struggling to find any form of consistency. With a top three that most of the competition are jealous of in Wade, McDermott and Short, the Hurricanes will look to flex their muscles on Saturday afternoon and set an unreachable target for this below par Brisbane Heat batting lineup. Despite the Heat’s efforts with ball in hand against the Sixers, the Hurricanes should be too good for the Heat in all facets of the game.

Nathan Ellis is one of the most exciting T20 prospects in the country and on Saturday afternoon, we expect the creative quick to take 2+ wickets against the Heat. Ellis has managed to take two or more wickets in three matches so far in BBL11, with all of those coming in Tasmania. He clearly loves the local conditions and against a fragile Heat batting lineup $2.15 looks to be a steal.