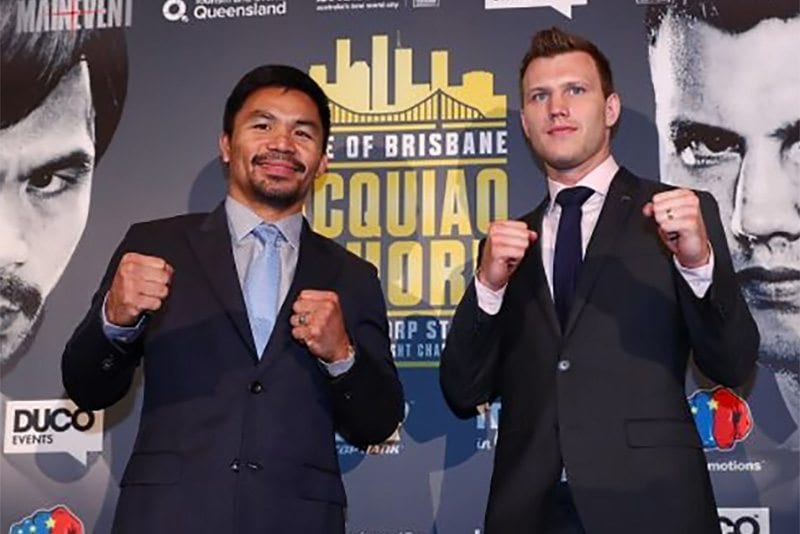 IF Jeff Horn and Manny Pacquiao ever renew hostilities in the boxing ring, it will be in Brisbane.

The Queensland government announced on Monday that ‘The Hornet’ and his management team, Duco Events, had ruled out the possibility of staging the much-anticipated rematch anywhere but Suncorp Stadium.

“Duco Events continues to work with Manny Pacquiao’s camp to try to lock in a date for a potential rematch, but we couldn’t be happier to have secured an agreement with the Horn camp that Jeff will only participate in that rematch if it is held in Brisbane,” said Queensland tourism minister Kate Jones.

“After his rousing victory in July, we vowed that any rematch would be held in Brisbane and this agreement brings that one step closer.

“The first Battle of Brisbane was a global event and one of the most successful in Queensland’s history, so to be staging a second and potentially a third in the future is a real coup for Brisbane and the State.”

The news comes as Horn prepares for his upcoming bout with English fighter Gary Corcoran, who will contest the WBO welterweight title at the Brisbane Convention and Exhibition Centre on December 13, 2017.

“In the meantime, it’s great to welcome Gary Corcoran to Queensland,” Jones continued.

A gypsy who lives in a caravan, Gary Corcoran, says he can knock out Jeff Horn. Read: https://t.co/mATlgFCGuw #7News pic.twitter.com/SyIMWAqfKM

“He’ll spend a few days getting to know the city before returning later in the year to challenge Jeff at what will be a world-class event at Brisbane Convention and Exhibition Centre.

“The Queensland Government through Tourism and Events Queensland in partnership with Brisbane City Council through Brisbane Marketing and Duco Events have worked tirelessly over the past few weeks to make this happen and we know the event will be well supported by Jeff’s growing fan base.”

Brisbane became the centre of the sporting world back in July when Horn defeated Pacquiao in a controversial ruling.

With the Corcoran bout also expected to generate significant interest worldwide, Lord Mayor Graham Quirk forecasted a bright future for the Queensland capital and its global profile as a sporting destination.

“I am delighted that our own Jeff Horn will get to defend his world championship title right here in Brisbane after his thrilling win against Manny Pacquiao at Suncorp Stadium in July,” Quirk said.

“We are expecting a capacity crowd at Brisbane Convention & Exhibition Centre and for millions more to tune in from overseas.

“The bout with Gary Corcoran and any future rematch with Manny Pacquiao will deliver many flow on economic benefits for the city’s tourism, retail and hospitality sectors, and once again showcase our city as a sporting and lifestyle destination to the world.

“This event will complete a feast of major international sporting events over three weeks including the Ashes and the semi-final and final of the Rugby League World Cup being at Suncorp Stadium.”

Online bookmakers have installed Horn as the short-priced favourite for his title defence in December.

The Queenslander is paying $1.20 in the outright betting at Sportsbet.com.au, where Corcoran is rated a $4.25 chance.

Bookies are also taking bets on potential fights with Anthony Mundine and Conor McGregor, despite a well-documented lack of interest from the MMA superstar.