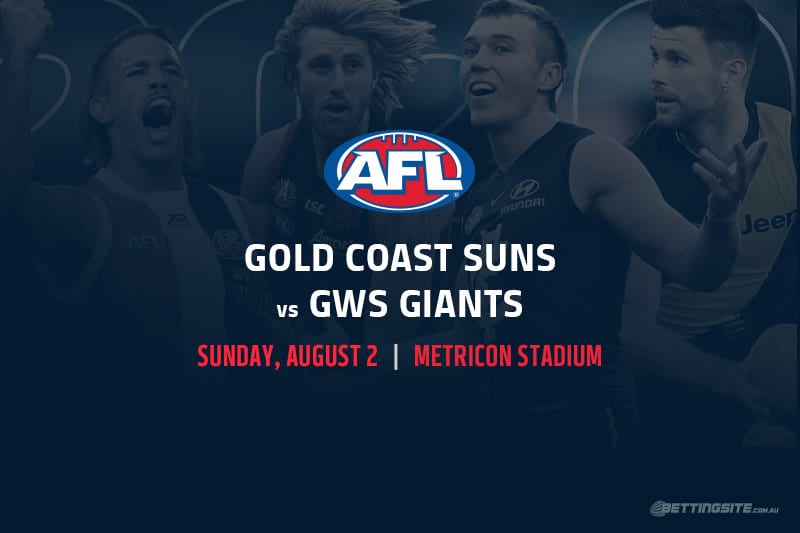 There’s plenty to look forward to this Sunday as the Gold Coast Suns host the Greater Western Sydney Giants at Metricon Stadium.

The two newest expansion teams have been in the AFL for nearly 10 years, but they’ve taken very different paths despite coming into the world under near-identical circumstances.

While the Suns have never made it to the finals, the Giants nearly tasted premiership glory in 2019 when they lost to Richmond in the AFL Grand Final.

GWS boasts the deepest list in the league and will be banging on the door again this year, whereas Gold Coast is looking to build a strong culture under Stuart Dew after some rough years.

Both teams sit at 4-4 this season, but the Suns are two rungs higher on the ladder in 10th place thanks to a strong percentage.

Leon Cameron has coached GWS to eight straight wins in this matchup, but this Gold Coast outfit is a huge improvement on what we have seen in recent years.

Ben Ainsworth is an explosive small forward that can get up the ground and damage teams with his high footy IQ and kicking ability. He put up career-high numbers against the Giants in round 23 last season, collecting 27 disposals. With four matches above 15 touches this year, we like the odds attached to Ainsworth here.

Josh Kelly is starting to take the game on a bit more and use his kicking to advantage all over the ground, demanding the ball from his teammates more often. The superstar midfielder had 40, 36 and 27 disposals in his last three matches against the Suns, while he had 26 against Richmond last week, so the form lines are strong.

Leading the AFL Rising Star betting market after only three matches, Izak Rankine has taken the footy world by storm. He is averaging an impressive five shots on goal per game, so there is no doubt he will find a few opportunities this week. It all comes down to conversion, as Rankine kicked 1.4 in Gold Coast’s narrow loss to the Western Bulldogs.

It sounds too good to be true in 2020, but Jeremy Cameron averages over four goals per game against the Suns. While Gold Coast is a different beast this year, you cannot ignore that kind of record. Cameron went goalless last week for the first time since round nine in 2019, so punters can feel confident he will respond with a few on Sunday.

Perfect conditions for footy on the Gold Coast should see both sides control the ball well and move it forward efficiently, leading to plenty of clear scoring opportunities at either end. Both teams have dynamic forward lines that can jag goals from anywhere and keep the scoreboard ticking over, which makes the overs the more attractive option here.

Jeremy Cameron should be a force inside 50 and the Giants midfielders have lifted in the last fortnight, so they are hard to tip against. The Suns have been excellent this season, but this matchup favours GWS and should finish with a big win to the men in orange and charcoal.