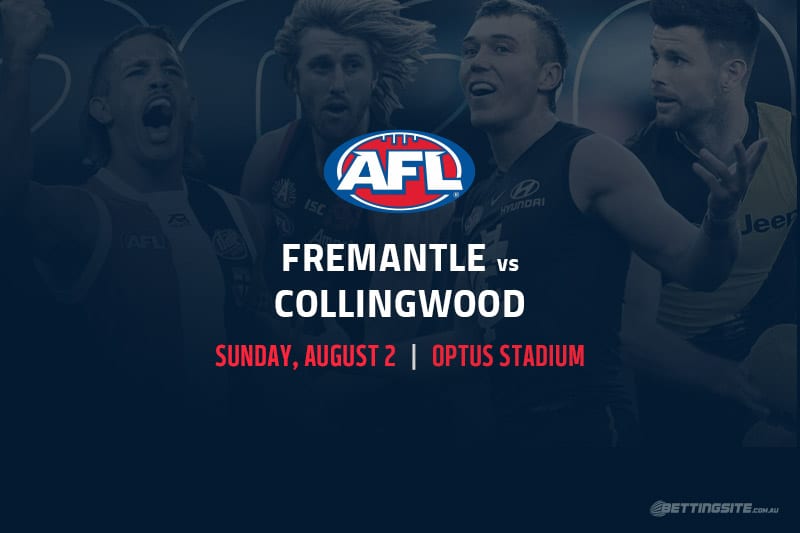 The final match of round nine will see the Fremantle Dockers host the Collingwood Magpies on Sunday afternoon at Optus Stadium.

It was the Dockers that escaped with a road win over the Magpies away in 2019, saluting by four points in a tight contest at the MCG.

Team selection will be the biggest talking point for the Pies as they look to fill the midfield void left by Scott Pendlebury and possibly Callum Brown, who sustained an ankle injury last week.

Freo’s injury list is growing longer by the day, with Michael Walters joining an array of starting players on the sidelines after straining his hamstring in the loss to Geelong.

Nat Fyfe returns to captain the Dockers, but Darcy Tucker is out for the rest of the season and Stephen Hill is still another week away.

The injuries to Walters and Scott cancel each other out to some degree, while the inclusions of Fyfe and Steele Sidebottom are very helpful for their respective teams.

Two-time Brownlow Medal winner Nat Fyfe faces a big assignment in his first game back as he rejoins a depleted Fremantle midfield. Fyfe always takes on a big workload for the Dockers, so we can expect him to accumulate plenty of ball despite the relative lack of support in the middle.

Brodie Grundy played his worst game in years last week against Nic Naitanui, but this is a great chance to remind everyone how good he is. Sean Darcy is a young ruckman that is most effective when he can use his body at the stoppages, but Grundy will take him to town around the ground and rack up stats aplenty.

West Coast’s tall forwards had their way against the Collingwood defence last week, and we can see Matt Taberner taking a few contested marks and kicking a couple of goals. Not only is Taberner very strong in the air, his ability to run up and down the field means he can beat defenders back to the goal square in a fast-break situation.

Collingwood fans have been fed up with the forward structure over the last few weeks, as some of the team’s most gifted goalscorers have been used up the ground. Jaidyn Stephenson was good on the wing against the Eagles, but he didn’t have much to kick to inside 50. The 2018 AFL Rising Star should start this match out of the goal square, where he has wreaked havoc early in games this season.

You might expect these two teams to score under the total match points with so many players out for both sides, but there are still plenty there who can hit the scoreboard. Collingwood have several avenues to goal even with Jordan De Goey out injured, while the Freo forwards will look to exploit some of the holes that showed up in the Pies’ defence last week.

Although the Dockers beat the Magpies last season and have been very good at Optus Stadium, their injury list has now reached critical proportions. Expect Steele Sidebottom to make an impact in his first game back from suspension as the Pies bounce back with a win.