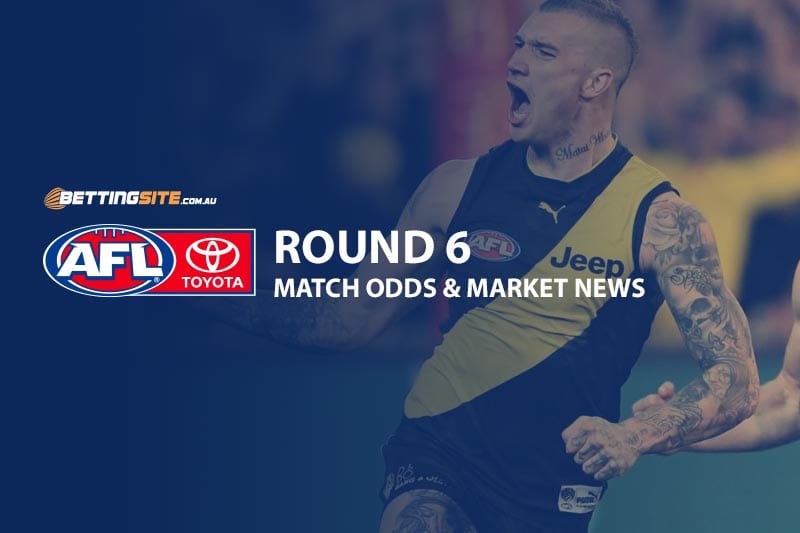 The 2020 AFL Premiership will take on a shape in round six as all 10 Victorian clubs move interstate in order to escape the second wave of COVID-19 in their home state. Let’s look at this week’s matchups and the latest AFL odds at Sportsbet.com.au.

Kicking off round six is a brilliant contest between the Geelong Cats and Brisbane Lions on neutral territory at the Sydney Cricket Ground. Both teams are coming off strong victories in round five, but one of their winning streaks will end this Thursday night. We like the Lions at $1.72, but the Cats are great value at $2.10 if you think they can pinch this match.

The Collingwood Football Club ($1.72) is dealing with myriad distractions at present, but the Magpies will need to put everything behind them this Friday night when they face a real bogey side in Hawthorn ($2.10). Jordan De Goey will not travel with the team this week, meaning the other Collingwood forwards need to step up again. The Hawks will look to bounce back after a tough loss to the Giants on Sunday, but the five-day break will make things extremely difficult for the players.

Justin Longmuir tallied his first career win as a coach last weekend as Fremantle downed a struggling Adelaide side, but St Kilda will be very hard to beat this Saturday. Nat Fyfe is a cheeky chance to return from a hamstring injury for this match, but he will be pushing himself for time during the week. The Saints are inside the top four and rightful favourites for this contest at $1.34, while you can get on the $3.18 Dockers to win at Metricon Stadium.

One big win over the Swans last week ensured the West Coast Eagles’ season wasn’t over, and this weekend’s clash with the Adelaide Crows is a perfect opportunity for Adam Simpson’s men to claim back-to-back victories. This will be the last game before West Coast returns home to Perth, and Adelaide to South Australia. The $1.13 Eagles are obvious favourites over the 0-5 Crows at $5.75, who’ve statistically been the worst Adelaide team in history.

Coming off disappointing losses, both these teams will look to get back on the winners’ list at Giants Stadium this Saturday night. Melbourne couldn’t overcome the injury-riddled Tigers, while an early shoulder injury to Matt Rowell severely hindered the Gold Coast Suns against the Cats. Both teams will make a few changes this week, but the Demons start as slight $1.80 favourites over the $2 Suns.

Plenty of cheeky banter was shared back in round two when Essendon and North Melbourne shared a flight to Sydney, but the rivalry will come into full effect when they face off at Metricon Stadium this Saturday night. These two clubs clearly do not like each other, making this contest an interesting one to observe. We loved the Bombers’ attitude against the Magpies and like their odds even more at $1.57 against the $2.35 Kangaroos.

Sunday starts off with a massive clash between these two interstate super-teams. Port Adelaide finally dropped a game when it lost to the Lions on Saturday, while Greater Western Sydney was clinical in its win against the Hawks on Sunday night. Punters will find it hard to split the two, with the Power at $1.98 and the Giants at $1.82.

The main question will be whether Richmond can survive without more than half a dozen of the club’s best players, but the Sydney Swans are not without their own injury worries. Even with all the missing stars and playing on neutral at the Gabba, the Tigers start at $1.72 to beat the $2.19 Swans, who have missed key position targets in the forward line all season.

Closing out the round six action will be an interesting contest between the Carlton Blues and Western Bulldogs. The Doggies are getting better each week, putting three straight wins on the board without a range of stars, while the Blues continue to see-saw in form. You can get on the Bulldogs at $1.52, making the Baggers $2.48 outsiders.