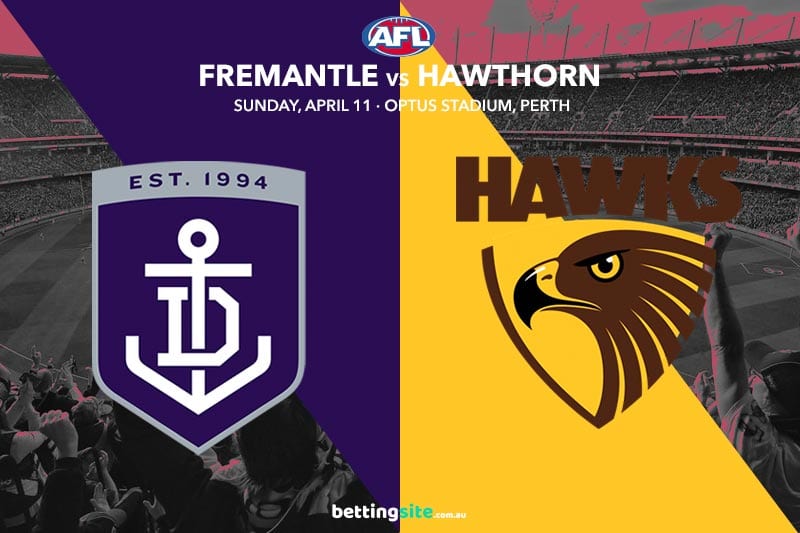 Round four of the 2021 AFL Premiership season will conclude this Sunday with the Fremantle Dockers hosting the Hawthorn Hawks at Optus Stadium.

Both the Dockers and Hawks have started their seasons with one win and two losses, but their younger players have given fans plenty to cheer about.

Andrew Brayshaw, Adam Cerra and Caleb Serong look fantastic in the Fremantle midfield, while Changkuoth Jiath and Tyler Brockman have been very exciting for the Hawks.

Fremantle captain Nat Fyfe will return from concussion this week, but promising youngsters Lachie Schultz (concussion) and Hayden Young (hamstring) will miss out.

Last season’s clash between these sides ended with a total score of just 80 points, and since wet weather is predicted in Perth this weekend, we could be in for another slugfest.

The 2020 Rising Star winner has started his second AFL campaign in fine form, averaging 23 touches per game while spending more time in Fremantle’s midfield. Serong has a similar build to Tom Mitchell, and it would be no surprise to see them match up together at most contests. Mitchell is finding plenty of the footy this season, but Serong will do his part in quelling the Brownlow Medallist’s influence this afternoon.

Justin Longmuir has spent his short tenure at the Dockers crafting a strong defensive brand. The Dockers normally keep opposition scoring to a minimum, making a majority of their matches low-scoring contests. Matt Taberner and Michael Walters are their most notable goalkicking options this week, so look to include them in your AFL betting picks.

The Hawks rank sixth in the AFL for points against and 16th for points scored. Jack Gunston’s injury-enforced absence has hindered the Hawks inside 50, as Mitch Lewis, Tim O’Brien and Jacob Koschitzke have not been prolific in front of goal. Given Freo like to keep their games tight, we could be in for an arm wrestle.

Luke Ryan to get 25+ disposals

Luke Ryan leads the Fremantle back six every week and is averaging more than 20 disposals per game this season. Ryan is one of a few Freo defenders who take the kick-ins from full-back, and with Hayden Young injured this week, he should have more opportunity for easy disposals. Ryan had 21 touches against the Hawks in shortened game-time last season.

Like this matchup last year, the Dockers should get over the line in a close contest. The Hawks have had the edge over Freo in recent seasons, but the Dockers have improved beyond sight since Longmuir took over as head coach.

A rainy forecast, Fremantle’s defensive mindset and Hawthorn’s scoring issues mean we should see a low-scoring contest at Optus Stadium this Sunday. The Dockers have enough firepower in the midfield to drown out the Hawks, but the visitors should do enough to keep it close.