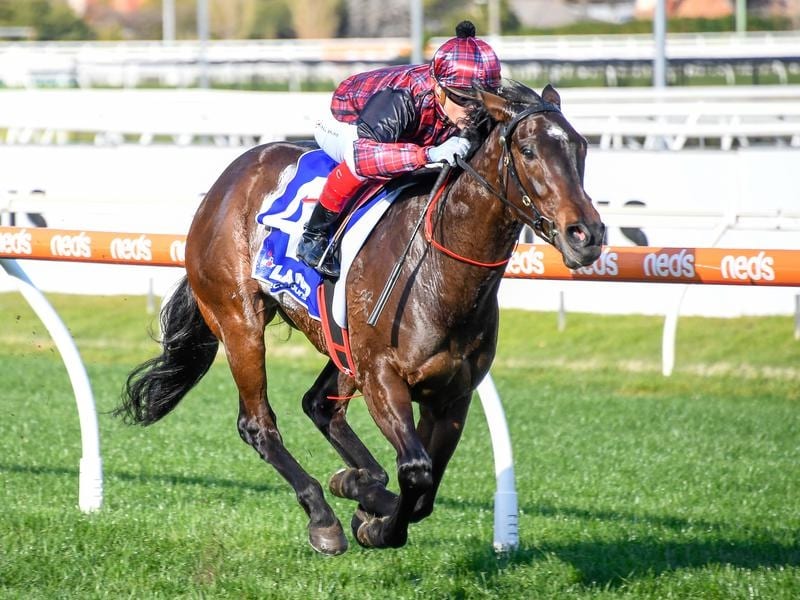 Felicia has capped an unlikely comeback to racing to win at Caulfield under Craig Williams.

Felicia has defied the odds to return to racing and the talented filly has delivered a satisfying win for her trainer Dean Binaisse at Caulfield.

Ridden by Craig Williams, Felicia was sent out the $2.80 favourite in Saturday’s Hyland Sportswear EOFY Sale Handicap (1200m) and sat outside the lead before bursting clear in the straight to win by 3-3/4-lengths.

It was her first win in five starts since joining Binaisse’s stable after winning her first two starts in South Australia as a two-year-old before spending more than a year off the scene.

“This is a ‘dead horse walking’,” Binaisse said.

“This horse had two vet clinics wanted to put her down after a knee op when she came to us.”

Felicia has been able to return to racing after another operation and after knocking on the door with three placings from her four starts this campaign the filly broke through in stylish fashion on Saturday.

Felicia defeated Brazen Song with Paris another 2-1/4 lengths away third.

“The other runs that she’s had, I was pretty disappointed that we just couldn’t quite get the win.”

Melbourne’s jockeys’ premiership leader Williams believes Felicia can go on with it as a four-year-old mare.

“She mightn’t be the most attractive horse but she’s got a great motor and a really good will to win,” Williams said.

“There’s no doubt after her three-year-old preparation she’s going to be a really good mare.”