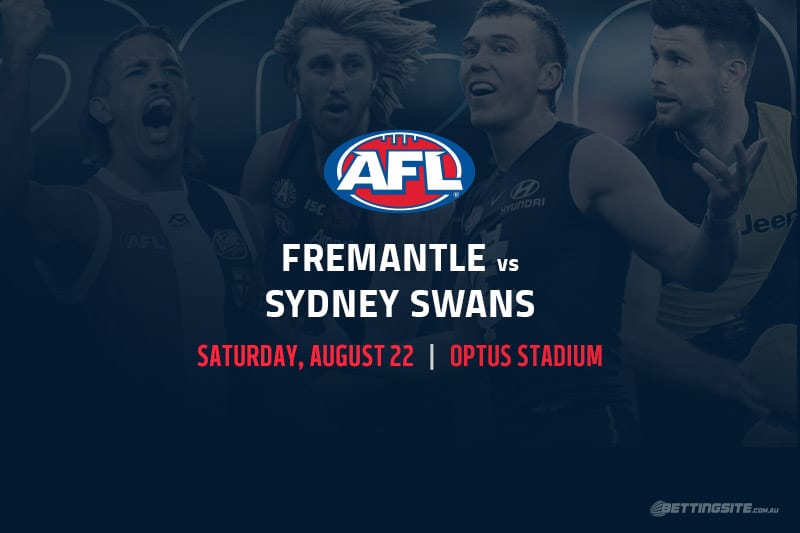 The Fremantle Dockers and Sydney Swans sit 3.5 percent apart on the AFL ladder with four wins after 11 games, but both teams are building momentum towards the of end the 2020 season.

If not for a last-second free kick and after-the-siren goal to Carlton last week, the Dockers could be sitting 12th on the ladder and one win outside the eight.

Much to everyone’s surprise, the Swans belted the GWS Giants in round 11 and showed their young squad could ruffle some feathers in the remaining rounds.

The biggest talking point heading into this match is the absence of Dane Rampe, who re-broke his hand against the Giants and will sit out the rest of the season.

You only need to look at Jake Lloyd’s last two matches against the Dockers to understand this tip, as the small defender amassed 41 and 42 disposals in those outings. We can also expect Lloyd to take on a more prominent role while Rampe is out, as he now becomes the leader in the back six.

Matthew Taberner is one of very few players in the AFL to kick a goal in every match this year, and we think he towels up the Swans. With Rampe ruled out and the Dockers in good form, Taberner’s strong overhead marking should come to the fore. You can even look to boost your odds to $3.10 and try Taberner to kick 3+.

The Swans’ injury list is one of the longest in the league and includes genuine stars like Lance Franklin, Isaac Heeney, George Hewett, Josh Kennedy and now Rampe. Freo’s midfield is getting better all the time with emergence of Andrew Brayshaw, Adam Cerra and Rising Star favourite Caleb Serong, allowing the likes of Nat Fyfe and Michael Walters to spend more time in the forward half. We can see the Dockers controlling this game, although they lack the firepower to put up a big margin.