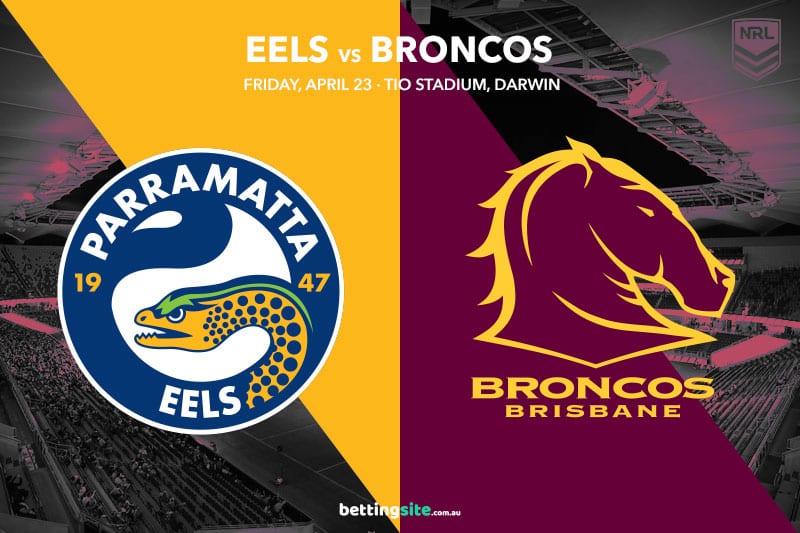 The 2021 NRL Premiership heads north in round seven as the Parramatta Eels take their home game against the Brisbane Broncos to Darwin on Friday night. Parramatta ended a 15-year hoodoo in Canberra with a dominant win last week, but it might count for nothing if they don’t turn up and put in a good performance against a much-improved Broncos outfit that almost knocked over the premiership favourites in Penrith last week. Brisbane in the space of eight days will have knocked $9 off their head-to-head price, while the Eels can’t afford a loss against an opponent who they should handle comfortably in their quest to end a 35-year premiership drought.

If you think the Eels will take care of business in the NT, as many expect they will, you might as well take them at the line of -13.5 instead of the short odds for the 13+ margin. Isaiah Papali’i came from the clouds as a buy-of-the-year contender when these two sides clashed in round one, and he is fresh off a double against Canberra. Against the troublesome Broncos right edge, he will provide a bit of value as an anytime tryscorer, but a consecutive brace is out of the question. Mitchell Moses is coming off perhaps the best performance of his career and has traditionally carved the Broncos up, so make sure you include him in your multis.

An interesting stat for the Brisbane Broncos since the start of 2020 is they have lost 66.7% of games where they’ve led at the interval, whereas Parramatta have not surrendered a half-time lead in the same period. It does make the $3.10 for Brisbane to lead at half-time or full-time a viable option, given just last week they led the best team in the comp before losing it at the death. As usual, Xavier Coates must be included as a tryscorer bet. He missed out last week, but he is almost certain to get across this Friday.

Isaiah Papali’i has quickly become one of Parramatta’s most important players and will have a big challenge in facing up to Tevita Pangai Jr. Pangai’s offloading skills and power make him a handful, while Papali’i’s love for the collision makes him tough to handle in a different way. Pangai back in round two showed he can physically exhaust an opponent when he took it upon himself to run relentlessly at David Fifita in the second half of that game, and he may have to do the same to nullify the impact of Papali’i.

It would be the most Parramatta thing ever to have the huge win in Canberra and then lose to a lowly-ranked opponent within six days, but they should be too strong for an improving Broncos team. It will be a willing first half before the experience of the Eels takes the margin across the 13.5 line late in the contest.

The Eels with the -13.5 handicap into Xavier Coates and Maika Sivo to both score tries gets you $7.50 at Sportsbet.com.au.