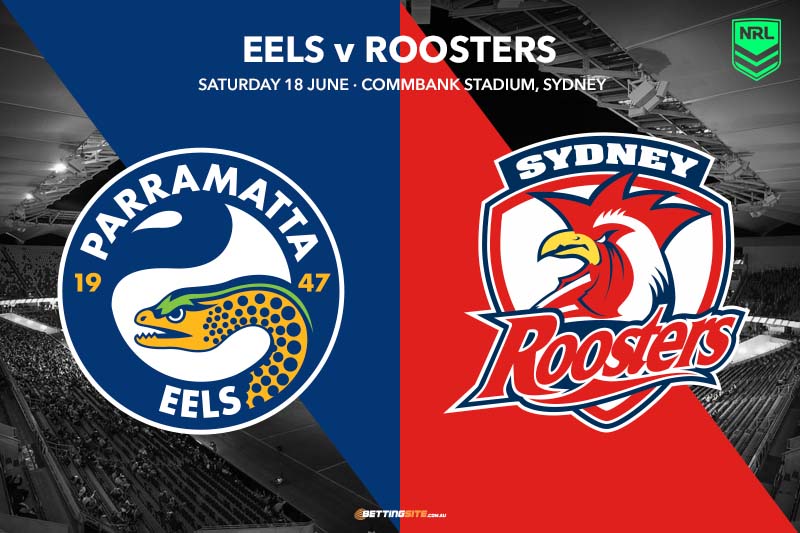 Round 15 of the 2022 NRL Super Saturday will wrap up when the Parramatta Eels host the Sydney Roosters at Commbank Stadium.

Both sides are coming off a loss in Round 14 but it was the Eels who left the entire NRL stunned when they fell to the Bulldogs by 30 points.

Parramatta Eels proved once and for all just how impossible they are. They’ve lost to the 16th placed team twice this season as well as having wins away from home against Melbourne and Penrith. I challenge anyone to find the logic in that.

When they lost to the Tigers earlier this season they bounced back with a resounding win over Newcastle, but the Roosters present a stiffer level of competition as they try to get their mojo back and remain in the race for the top four.

Coach Brad Arthur has remained faithful to the 17 who were embarrassed by the Canterbury-Bankstown and named the same side. That includes Maika Sivo who made a solid return from injury and is currently the shortest-priced Eel to score the first try of the game at $9.75. He has three tries in four career games against the Tricolours, so take the $2.05 on offer with Betfair for him to get across and make it four from five.

Expect the $1.78 (available with online bookmakers on Thursday) price to blow out in the lead up to kick-off as the bad taste around the Eels and their last-start creeps in. The line is currently at -1.5 and unless there is any late injury news it should remain the same.

The Sydney Roosters had plenty of positives to take out of their 26-18 loss to Melbourne, but the biggest negative was another concussion suffered by Luke Keary. While he has been named, it would be a miraculous turnaround if he was able to take his place, so expect Drew Hutchison to come into the halves in his place. Sam Verrills will make a timely return at hooker for the Tricolours and it should hopefully mean some more continuity to their football. It makes them an attractive pick to secure the upset at the $2 price, as well as the desperation of not wanting to fall out of the top eight.

Joseph Suaalii and Daniel Tupou both come in at $9.50 to score the first try, but the best realistic value might be the $14 on offer for James Tedesco. His form in recent weeks has been mesmerising and he will want to keep that momentum rolling before he leads New South Wales in State Of Origin II.

The $3.10 on offer for a 1-12 point win has to be the big consideration if you think the upset is on. The Roosters proved too good back in Magic Round and with the return of Verrills it could push them over the top once more.

The hooking battle between Reed Mahoney and Sam Verrills shapes as a big one for this contest. Mahoney hasn’t been anywhere near his best form in recent weeks and the number nine jersey for the Roosters has been a poisoned chalice in 2022. The positional battles across the park are relatively even and whoever gets the better of it between the two hookers could prove to be the difference.

The Roosters will get the upset win at the 1-12 point margin and keep their head above water. Parramatta will sink a little lower and the headlines and media attention will become increasingly negative.