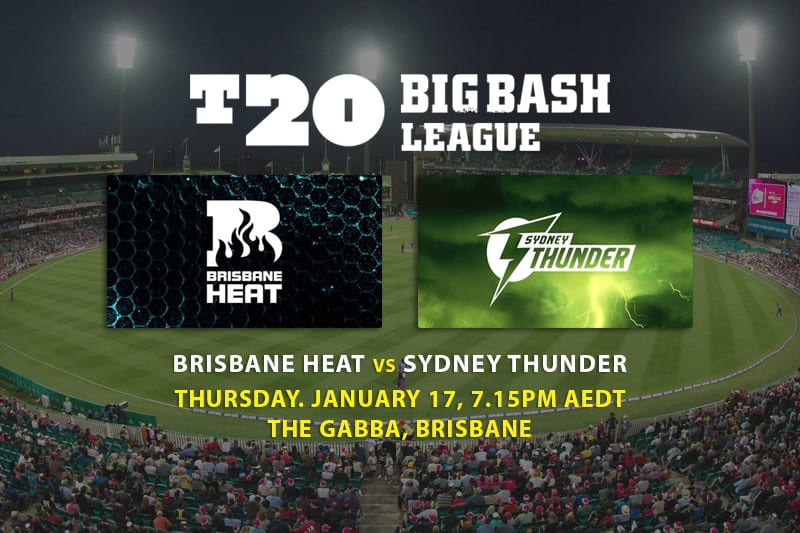 Both the Sydney Thunder and the Brisbane Heat will enter this clash in red hot form.

In their previous matches, both teams batted first and set a total that was clearly unreachable for their opponents, with the Thunder winning by 71 runs and the Heat by 101 runs.

The wide array of Thunder bowlers are a force to be reckoned with.

Last Sunday saw seven different players take a wicket against a talented Adelaide Strikers batting brigade, bowling them all-out before the 18th over.

After eight matches, the Sydney Thunder sit second in the standings with four victories, while the Heat have three wins from seven games.

Sydney captain, Jos Buttler, alongside England captain, Joe Root, have both finished their seasons in the BBL, returning to the UK in order to prepare for a test series against the Windies. Without this dynamic pair, the Thunder could be vulnerable to a powerful bowling line-up.

The Heat have been lucky enough to retain its captain Chris Lynn after he missed out on selection for the Australian ODI series against India.

This will be the second time the Thunder and Heat face off this season. The first match was interrupted by rain and was decided by the Duckworth-Lewis method.

Daniel Sams is known for his fast bowling and brilliant Yorker, which is backed up by excellent wrist-work and power with the bat.

Whether it’s taking a handful of wickets or posting a large total after a stunning stint at the crease, Daniel Sams is an all-rounder that can win matches for the Thunder.

Sams has bowled a top four batsman in almost every match he has played and continues to average around the 20-run mark with the blade, showing a handy ability to clear the rope and up the run rate.

The Brisbane Heat managed to pile on 186 runs against the Thunder in the last match-up and could do so again.

With Brendon McCullum and Chris Lynn at the crease, it is hard to see the Thunder beating the favourites in this match.

Shane Watson and Daniel Sams would need to play extraordinary matches if the Thunder were to overcome Brisbane at the Gabba, were they are yet to register a victory.