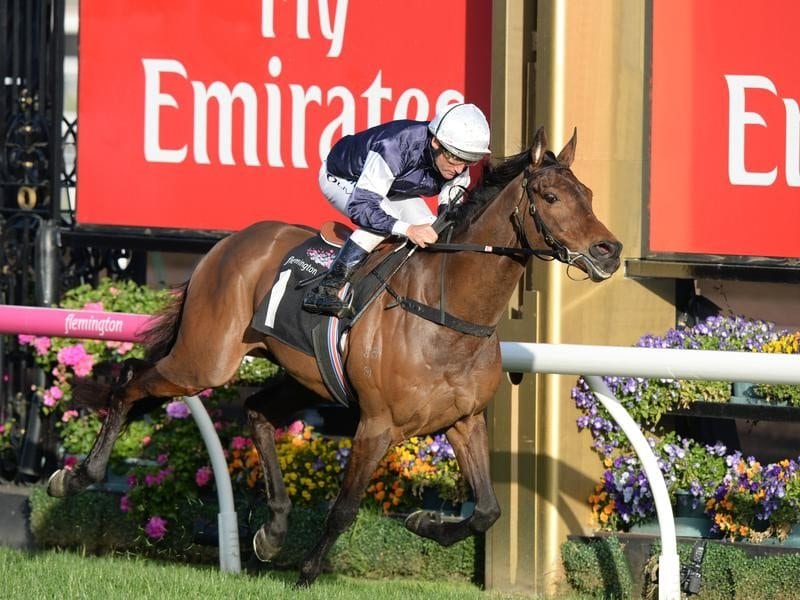 Damien Oliver winning on Almandin who he will ride when he defends the Melbourne Cup.

Damien Oliver’s chance to win a record-equalling fourth Melbourne Cup has soared after the jockey confirmed his booking for defending champion Almandin.

Oliver rode Almandin to an emphatic victory in Saturday’s Listed JRA Trophy (2500m) at Flemington, after which the stayer firmed to outright favouritism to go back-to-back in the Melbourne Cup on November 7.

Owner Lloyd Williams has yet to announce which path the eight-year-old will take to the Melbourne Cup which is seven weeks away.

“I’m happy to say that I’ve been booked to ride him, so that’s great,” Oliver told RSN927 on Monday.

“It’s a great opportunity. The riding ranks are really competitive in Melbourne at the moment so to land a top chance in the Melbourne Cup this early, I couldn’t be happier.”

Oliver is unbeaten in three rides on Almandin.

He rode him in two lead-up races during the 2016 spring but missed the Melbourne Cup ride because Almandin’s 52kg was well below his weight range.

Almandin has been given 56.5kg this time around and Oliver believes the stayer has come back better than last year.

Oliver has won the Melbourne Cup on Doriemus (1995), Media Puzzle (2002) and Fiorente (2013), with his three wins placing him one behind Bobby Lewis and Harry White.

Almandin will be striving to become just the sixth horse to win more than one Melbourne Cup.

Oliver was glowing in his praise of Almandin’s performance on Saturday when the gelding sprinted to the front with ease early in the straight and cruised home to win by 2-3/4 lengths under 61kg.

“I think he’s come back better than ever, without a doubt,” he said.

“It was obviously a comprehensive win.”