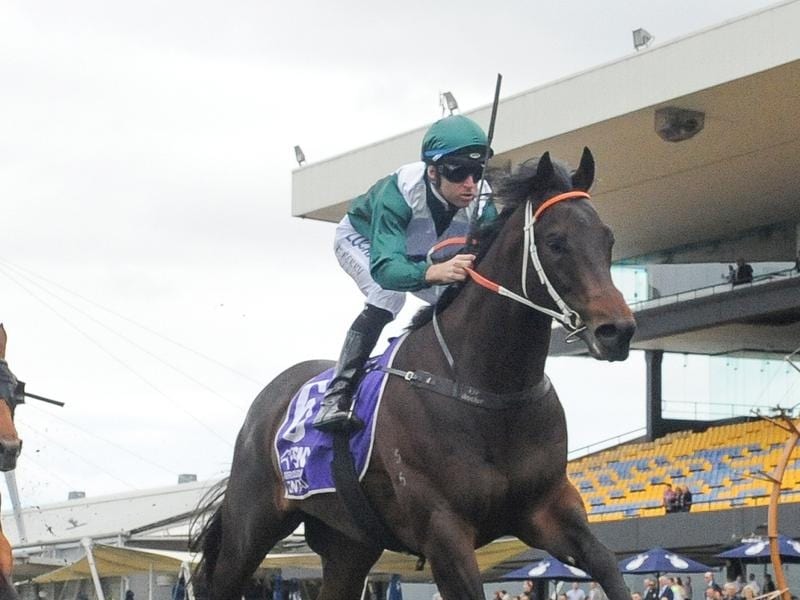 Exceedance will put his Golden Rose favouritism on the line in a lead-up race at Rosehill.

Five of the top six Golden Rose fancies will go toe-to-toe in a crucial lead-up race at Rosehill but they won’t be the only three-year-olds putting their spring carnival credentials on display.

Exceedance, Tommy Berry’s mount and the reigning favourite for the Group One race, will clash with Bivouac, the Chris Waller-trained pair of potential The Everest contender Yes Yes Yes and Kubrick, Rosebud winner Dawn Passage and the resuming Prince Fawaz in a stellar renewal of the Run To The Rose (1200m).

“It’s probably the best crop of three-year-olds I’ve seen for a while in Sydney,” Berry said.

The only other horse prominent in Golden Rose betting, Champagne Stakes winner Castelvecchio, will also be in action at Rosehill on Saturday but his camp has decided to kick off in the Listed Dulcify Quality (1500m).

Exceedance tops Run To The Rose markets after his stunning first-up win in the San Domenico Stakes when he showed he was equally as brilliant on wet tracks as dry.

There is greater depth to Saturday’s field but Berry has complete faith Exceedance can rise to the challenge.

“They’re an even bunch and every time he goes around now it’s only going to get a bit tougher for him,” Berry said.

“But he’s been doing everything right, he’s been running good times, on wet and dry, he seems to be adapting to everything we throw at him.

“I can’t see why he’s not going to improve off his last start and be hard to beat again.”

Berry will be in a rival corner to Waller in The Run To The Rose but the jockey and trainer join forces in the Dulcify with Reformist.

Berry partnered the colt in two barrier trials last season and says he’s kept a watchful eye on his progress as Reformist has risen from a midweek win on debut to be Group Three placed behind Quick Thinker in the Ming Dynasty Quality last start.

“He’s a horse that has gone through his grades nicely, midweek company he won well and it was a good run the other day on a heavy track which he didn’t look like he enjoyed,” Berry said.

“You say the Run To The Rose is a good three-year-old race, the Dulcify probably doesn’t have as much high quality, but there’s still plenty of quality in it.”