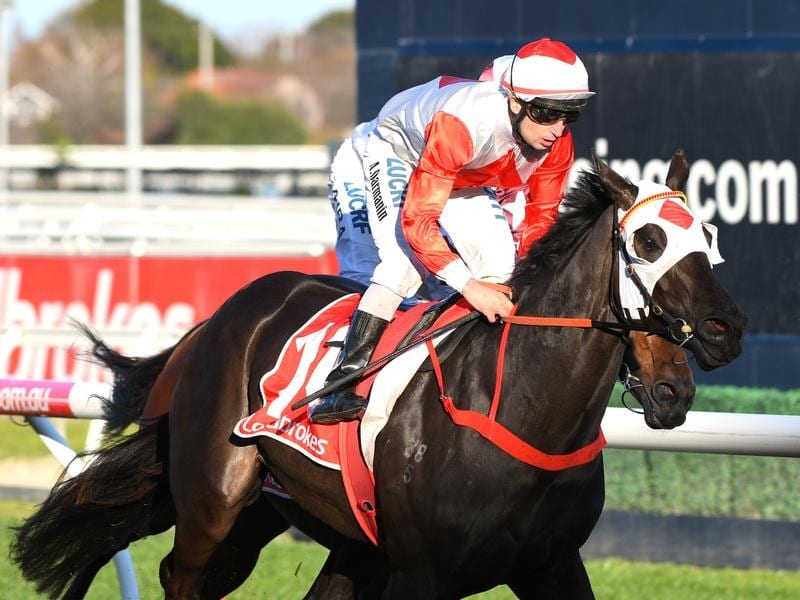 Mystic Journey is chasing her second weight-for-age win of the spring in the Makybe Diva Stakes.

It has been more than a year since Mystic Journey tasted defeat.

Her seven-race winning run has seen Mystic Journey emerge as one of the new headline horses of the Australian turf.

But her trainer Adam Trinder says he remains pretty relaxed as he prepares the mare for her next assignment in a campaign that is hoped will culminate this spring in Cox Plate success on October 26.

Saturday’s Group One Makybe Diva Stakes (1600m) at Flemington is the next step towards that objective and Mystic Journey is favourite to win again.

“I’m definitely not scared of defeat with her.

“We’ve got an objective and that culminates in October hopefully in a Cox Plate so we’d like to get her there in the best shape that she can be.

“Whether that’s with a picket fence next to her name or just a placing, a defeat doesn’t bother us, as long as the filly is in a good place.

“Obviously if she is able to get to a Cox Plate the pressure will intensify in the fortnight leading up to that. But as it stands I’m quite relaxed.

“She is in really good order so that keeps me nice and settled.”

Mystic Journey made a promising start to her preparation, winning first-up in the PB Lawrence Stakes (1400m) last month.

The mare returned home by ferry to Trinder’s Tasmanian stable the day after, as has become the norm when she races in Melbourne.

She is scheduled to arrive back in Melbourne early on Friday and head home again on Sunday, with Trinder looking to keep that same routine for the rest of her Melbourne spring campaign.

He had considered whether to keep her stabled in Victoria.

“She’s just more settled at home. She’s very relaxed and has got her routine,” he said.

“She just develops a little bit of nervous energy when she travels away to Melbourne, which for that 48 hour period I think is a really positive thing. I think you get a positive result.

“But delving any further beyond 48 hours I can see a negative result coming around.

“So I do just question whether, if she was good enough to be able to compete in a Cox Plate, whether we could win a Cox Plate with her training her from Melbourne.

“Obviously the travel doesn’t hurt her. I would dare to suggest nobody could ever think that. If they feel she would be faster when she didn’t travel, I don’t think that would be the case. They don’t go much faster than her.”