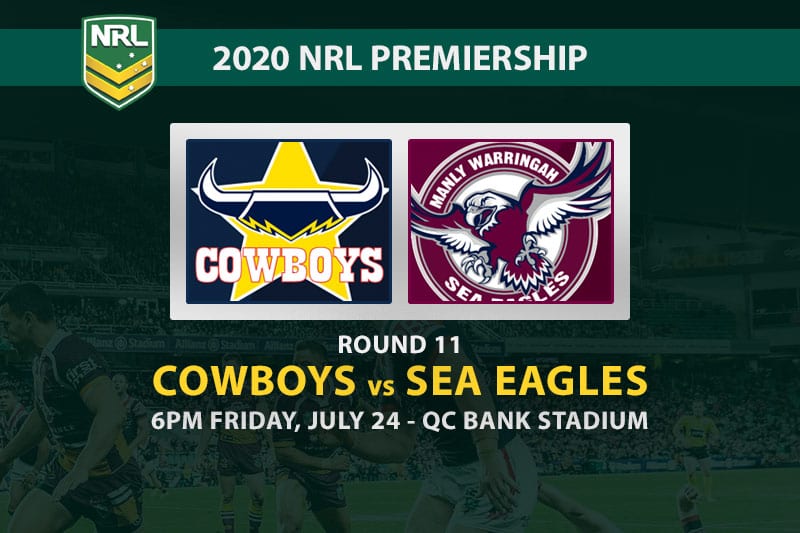 Punters will need to be reminded once more about one of the great sporting myths: the new coach bounce.

In the NRL era, teams that sack a coach mid-season have less than a 33% win rate the following round. Nevertheless, there will be chat about it this week and you’d be wise to ignore it.

Paul Green finally fell on his sword and ended his successful seven-year tenure at the North Queensland Cowboys, but not before unearthing gems like Hamiso Tabuai-Fidow and Daejarn Asi to give the incoming coach some good young talent to work with.

While the Cowboys were beaten 22-10 by the Panthers last week, they put up much stiffer resistance than their form line in Sydney suggested they would.

The Manly Sea Eagles, on the other hand, hit Parramatta early and often to run out 22-18 winners and put their season back on track.

Addin Fonua-Blake will once again miss out for the Sea Eagles, but this time it’s for not having his flu vaccination, which is a requirement for entry to Queensland.

Despite his absence, you can still get $1.72 for Manly in the head-to-head market, with the Cowboys coming in at $2.15.

The Cowboys’ last game at home was a capitulation against the Roosters, so they’ll be looking to atone for that horror show.

The Cowboys have only scored first in a game twice this season, so you’d be wise to look at the Sea Eagles in the first tryscorer market.

Jorge Taufua on the left will certainly be worth a shout due to the troublesome right edge for the Cowboys, but it might also be worth looking at Reuben Garrick on the right.

The 23-year-old Manly winger has scored just one try this season after bagging 16 in his rookie campaign last year, so he is certainly due.