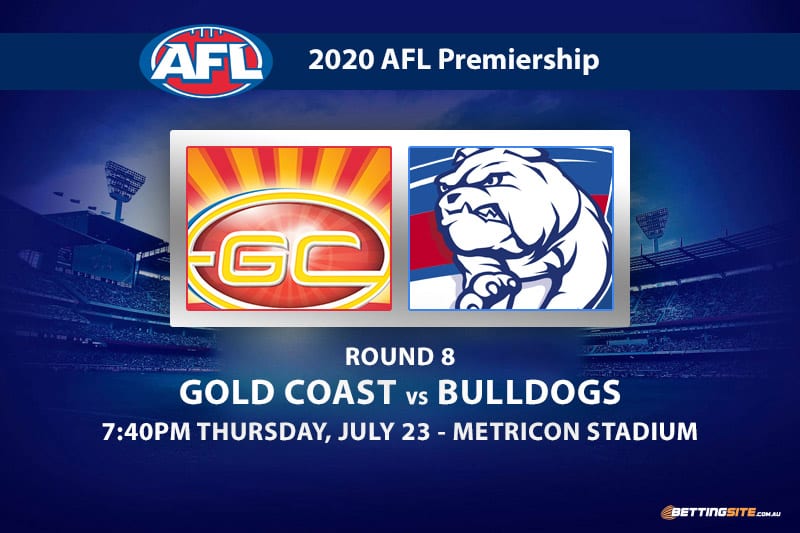 The floating AFL 2020 fixture has allowed the league to put the most exciting teams in primetime positions, which is why the Suns and Bulldogs will kickstart round eight this Thursday night.

The Gold Coast Suns will finally have the chance to strut their stuff during one of the premier free-to-air timeslots, which they’ve earned with some impressive footy since the restart.

Both teams sit in a position to attack the finals, and the winner of their bout at Metricon Stadium is likely to finish the week inside the top eight.

The Suns enjoyed a big win over the Swans in Sydney last week, but it was the Western Bulldogs who made the biggest statement in round seven with their 42-point smashing of Essendon.

Plenty of young talent will be in the limelight this Thursday, especially the Rising Star favourite Izak Rankine and Bulldogs second-gamer Cody Weightman.

Jack Bowes played well in the last two clashes between the Suns and Dogs, picking up 25 disposals last year and 21 in 2018. Now an established member of Gold Coast’s back six, he is yet to record under 17 touches in a game this season. We think Bowes will take plenty of intercept marks this week and rack up 20 disposals for the second time this year.

Quality half-backs have had a big influence so far this season, and Jason Johannisen has gotten off the chain a couple of times since the resumption. Gold Coast’s emerging forwards are still coming to terms with the defensive side of the game, which is why we expect Johannisen to use his pace and nous to find 20 disposals.

While all the hype has surrounded Izak Rankine and Ben King in the past few weeks, the Suns still have Alex Sexton as a classy option up forward. Sexton is very accurate when snapping the ball in traffic and should find a few opportunities to hit the scoreboard against the Bulldogs this Thursday.

The Western Bulldogs captain has led by example all season long, as his strength in the contest and damaging ball-use can tear teams apart. We think the Bont needs to push forward this week to create a mismatch where he can put one of the younger Suns defenders under some real pressure and impact the scoreline.

Metricon Stadium has been favourable to forwards this season, particularly for the afternoon games, but rain is expected to drown out this contest. We think both teams will struggle in the wet and find it difficult to direct ball movement through the conditions.

This one might come down to which side has the better defensive setup at the moment, in which case the Doggies should have the edge. Alex Keath and Bailey Williams should stop Ben King in the air, while Caleb Daniel and Jason Johannisen’s run and carry should get them out of trouble at ground level.