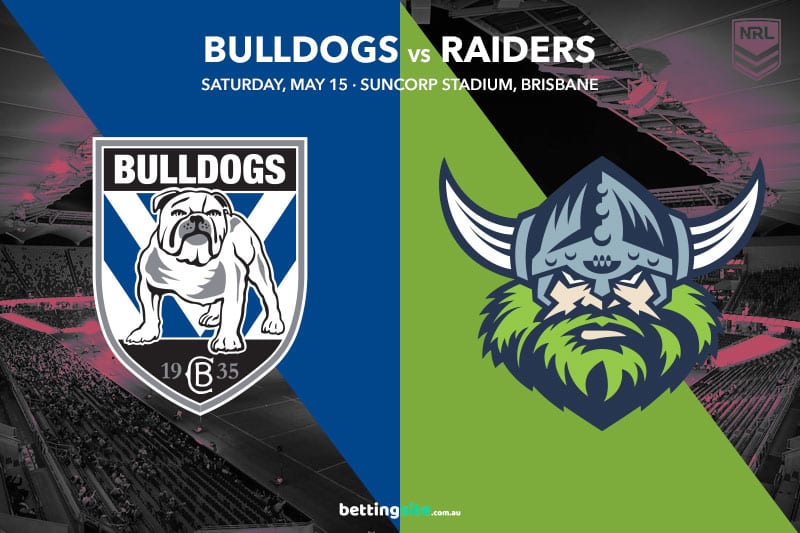 Super Saturday in the NRL Magic Round kicks off with two sides desperate for a win as the Canterbury-Bankstown Bulldogs take on the Canberra Raiders. Ricky Stuart’s men have given up half-time leads in four of their five consecutive losses, while the Bulldogs continue to trend in mediocrity and struggle to pose any threat to any of their rivals.

To give you an idea of how bad Canterbury are travelling, the Raiders are a short-priced $1.15 with NRL bookies to get the win despite their issues on and off the field. Will this be the game it turns around for Canberra?

Canterbury’s tryscoring form is not good. Their only tries in round nine came from a one-on-one strip and an intercept when the game was beyond reach, so it is hard to figure out where they can score points this week.

Bulldogs halfback Kyle Flanagan was hooked by coach Trent Barrett in that game, and just what happens now is going to be interesting to watch. Has Barrett already given up on Flanagan halfway through the first season of a three-year contract?

The one area you might get a win for Canterbury is taking them at the +15.5 line because of Canberra’s ordinary form. The Raiders will never have a better opportunity to get their season back on track, but perhaps they could fall into the trap of thinking it will happen for them purely because of their opposition?

Tom Starling is a good value pick to score a try; he should have plenty of space to operate down the middle of the field because of Canterbury’s lack of starch. Jordan Rapana and Bailey Simonsson should also be thrown into a quick same-game multi to boost the price, as there should be plenty of space out wide for them at different stages of the game.

A few weeks ago this looked like a cricket-score proposition, but the 1-12 price on Canberra could be the way to go purely because of how badly they are lacking in confidence at the moment.

Luke Thompson is the only Bulldogs forward who might get a starting gig at another NRL club. At some point the Canberra Raiders are going to turn their form around, and Thompson is the only Canterbury player who can match it in the middle with the Green Machine. Since his return from suspension he has too often been the sole performer, so going against someone like Josh Papalii in the engine room is going to be a big ask. Unless Thompson can get more help, the Dogs will get blown away in the middle third.

Canberra will finally break their losing streak and get a scrappy win in the 1-12 margin. Punters should take that price rather than the Bulldogs at the line as it is going to give a better price.

Bailey Simonsson is odds-on to cross the stripe at some point, while Tom Starling offers great value at the $4.33 quote. Combine those two with the Raiders 1-12 margin for a very nice $39 return at Sportsbet.