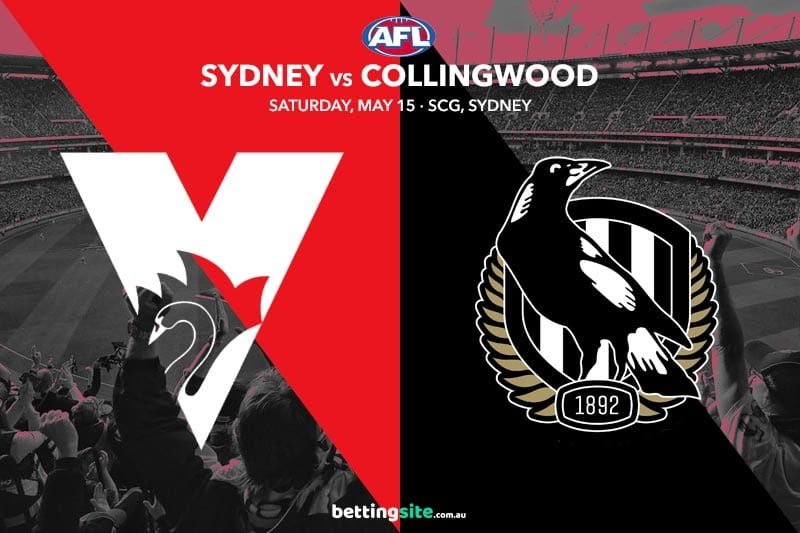 The Sydney Swans will play host to Collingwood at the SCG on Saturday afternoon in what looms to be quite the intriguing AFL Round 9 matchup.

The Swans stuck with the Dees all night at the MCG last weekend, but Melbourne dug deep to keep their undefeated streak intact. While Sydney went down by nine points in the end, they lost no admirers.

Collingwood, on the other hand, simply got the job done against the winless North Melbourne at Marvel Stadium. They will make the trip north without Jordan Roughead and Nathan Murphy, who both picked up concussions in the 18-point win over the Roos.

Online bookmakers have the Swans as $1.33 favourites to take their win-loss record to 6-3, whilst the Pies are $3.46 outsiders to bring up consecutive victories for the first time this season.

The Swans have dropped only one of their four games at the SCG this season, and that was a nail-biter against the GWS Giants where they led most of the day. The Swans have won by 1-39 points in four of their past five matches at their home ground, and with Collingwood there for the taking, odds of $2.10 are available for Sydney to hit that margin again this Saturday.

Collingwood fans would have enjoyed seeing Jordan De Goey back to his best when booting 6.3 in the Pies’ second win of the season. Prior to his six-goal haul against North Melbourne, the enigmatic forward had only seven goals in six games to begin his season. If the Pies are to have a chance on Saturday afternoon, they will need a big effort from the likes of De Goey, Pendlebury and Sidebottom.

Arguably the most improved player in the competition in 2021, Tom Hickey has been a key reason behind the Swans’ resurgence this season. He was serviceable against Max Gawn last weekend and now comes up against another star of the competition in Brodie Grundy. The footy media have begun to question whether Grundy’s influence around the ground matches his hefty salary, and he was overlooked in the coaches’ votes last week despite racking up 25 touches and edging Todd Goldstein in the hitouts. Grundy will want to set the record straight, but Hickey won’t be an easy beat.

Tom Papley is yet to be kept goalless in 2021, but he has only kicked three or more goals on one occasion this year (R3 vs Richmond). Papley threatened to take the game away from Melbourne last weekend but only managed 1.3 in a frustrating night. Small forwards tend to perform really well against Collingwood, yet Papley only has five goals from four games against the Pies. If Papley brings his best on Saturday, we have no doubt he will have a field day in front of the Swans faithful.

Brayden Maynard to get 20+ disposals

Brayden Maynard has been one of the success stories for Collingwood this year, averaging 20 disposals across the first eight rounds. Maynard is coming off a career-high 32 disposals against North Melbourne from 93% time on ground. He is a key asset in Collingwood’s backline, and we expect him to continue his good form in perfect conditions at the SCG this weekend.

If not for their last-quarter fadeout against the Giants, the Swans would be undefeated at the SCG this year. With a strong four-quarter effort, Sydney should be too strong for Collingwood on the back of a Tom Papley masterclass. We also like the $2 about Callum Sinclair to kick a goal.