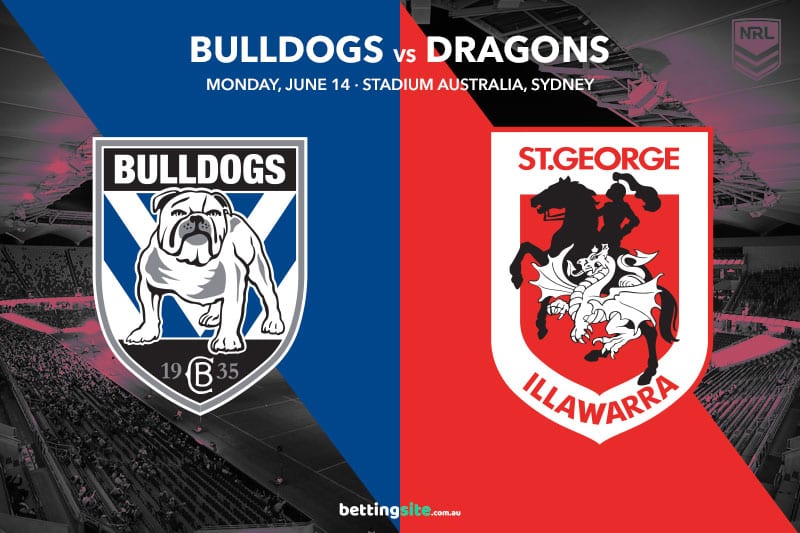 Round 14 of the 2021 NRL season will wrap up with a Queen’s Birthday clash between two old Sydney rivals when the Canterbury-Bankstown Bulldogs play host to the St George Illawarra Dragons at Stadium Australia on Monday.

This fixture could mark a turning point for the Dragons’ season, as it kicks off a run of games where they will start as favourites before their bye in Round 17. The Saints will get Tariq Sims back from an outstanding performance for the Blues in State of Origin, and Jack de Belin will play his second game back from a 27-month absence from the NRL.

Canterbury still have just the one win this campaign, but has a bye given them time to re-think some of their strategies in attack? Jeremy Marshall-King comes back in at hooker, while Kyle Flanagan remains on the reserves list.

The $4.50 in the head-to-head market for Canterbury feels short on the back of a five-game losing streak before the bye. They are going to struggle to generate points unless there is an unforeseen turn of events that flips the script, so there is enormous pressure on their defence to stop a team who scored 52 in their last outing.

Nick Cotric is the $14 favourite among the Dogs to score the first try of the game, while his opposite number is half the price. That is almost unheard of. Adam Elliott on the left edge has some value as a $6.50 anytime tryscorer option, but trying to find a slam dunk bet among the Canterbury 17 is a difficult task.

NRL bookies are giving the Dogs a +13.5 head start, but it will most probably not be enough. They showed against Penrith that they can keep the game close for periods only to get blown away, so avoid them in any of the match markets at all costs.

Last week it was the Matt Dufty show as the Dragons smashed the Broncos, and you have to feel he will use the game against the Bulldogs as another opportunity to get some highlights on film for his prospective buyers. He is just $8.50 to get the first try, but he is only $3.75 to score a double, which is incredibly short and more akin to a Tom Trbojevic price.

Dufty loves to go down the right and link with his outside men, so look at Gerard Beale ($2.88) and Mikaele Ravalawa ($1.40) in the anytime tryscorer betting for the Dragons. Ravalawa is also the favourite to score a double, which is paying $2.87 at Sportsbet. The numbers show they will get more than enough chances to cross the stripe.

As the sole Bulldogs middle-forward who would get a starting role on another NRL side, Luke Thompson has a huge task against a physical Dragons pack. Blake Lawrie is a big bopper, but the forward who he must stop is Paul Vaughan. Thompson and Vaughan have similar skill sets with fast footwork close to the line and the ability to generate quick play-the-balls. Keep an eye on both of these men as they try to win the ascendancy for their respective clubs.

The Dragons will hand out a sixth straight loss to the Bulldogs and win by at least 16 points, so don’t be afraid to crank up the match line for better odds.

Matt Dufty will star and Cody Ramsey should also cross at some stage, while Mikaele Ravalawa is a good chance to bag a brace as the Dragons win comfortably.